You can hear them from far way, shouting through the jungle. Laughing. The backpackers are always looking for a party, no matter in which beautiful corner of the world they are. It doesn’t matter which beautiful corner of the world it is, really. The parties remain the same. Austalians, Germans, British, French. Everyone gets drunk, a couple of sluts get laid and some lads have a good story for tomorrow morning. When they look back at their travels, they remember how much fun they had.

[Read in Cali girl accent]: ‘Oh my god it’s so amazing to see how happy these people are with so little!’ She saw a Mexican child smile at her when she went outside of her hostel to score some tacos, while being hungover from playing drinking Jenga.

I might hope I’m different, but I know I’m not.

Welcome to the Gringo Trail.

The Gringo trail is an ambiguous line that stretches from “who knows” to “i dont know where” in Central America. It is hard to tell where it begins and where it ends, but all we know is that we made it.

When we last updated we were on our way to Guatemala after a brief stay in Belize. From what I hear the gringo trail might start in Caye Caukler (Belize) but we didn’t go there…too expensive.

For our purposes, the gringo trail started in a town called El Remate, located in Peten in the north of Guatemala. It is a popular site for visiting the most famous ruins of Guatamala, Tikal. 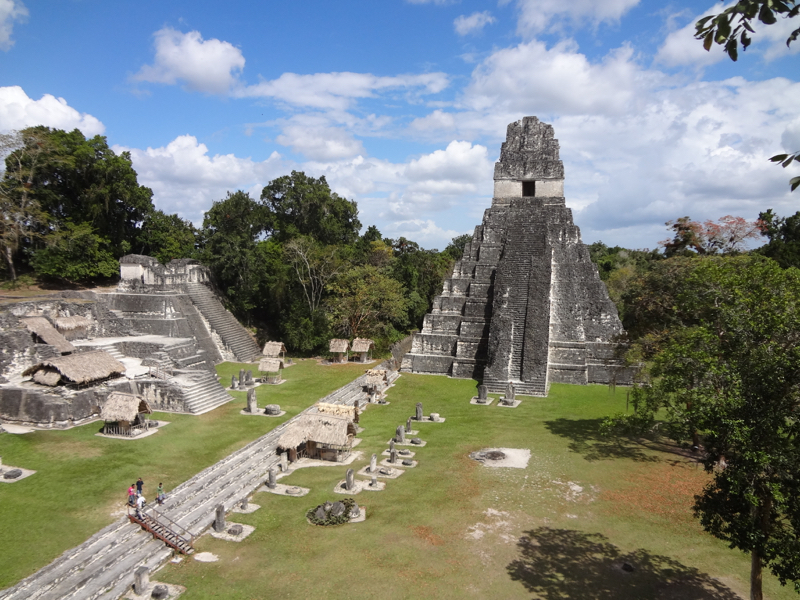 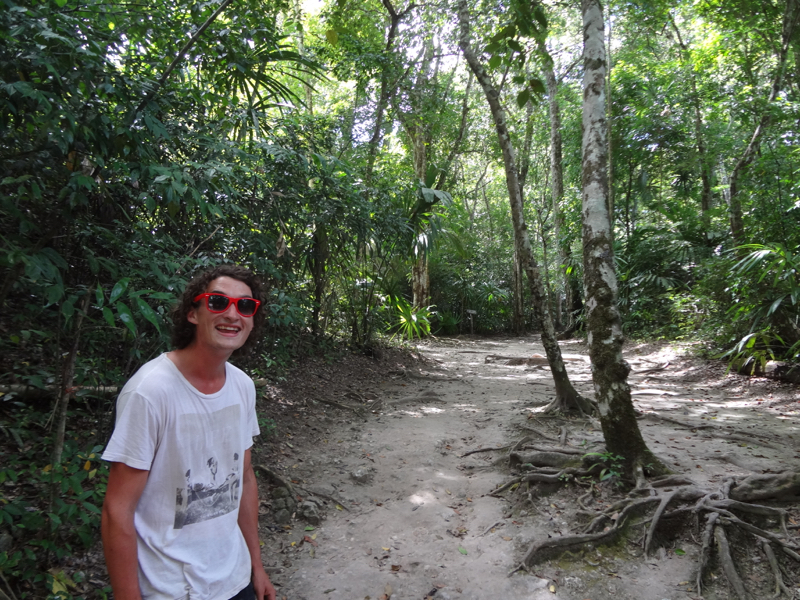 As you can clearly see, Tikal is fucking beautiful. We both freely admit that ruins aren’t really our thing but as far as ruins go, these are the best we’ve seen.

Rather than having a mowed lawn and a “lobby” these ruins are truly wild. We walked around the place for about 3 hours and saw a total of six monkeys (in two separate groups). 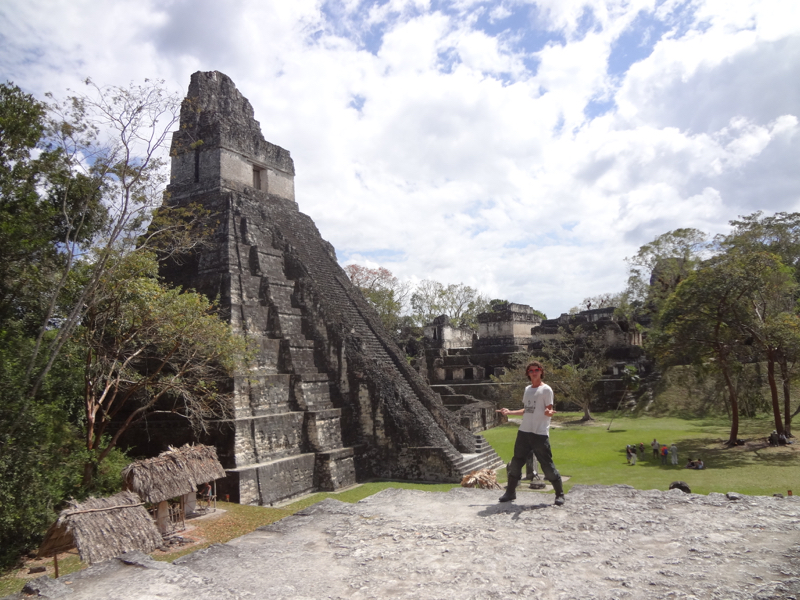 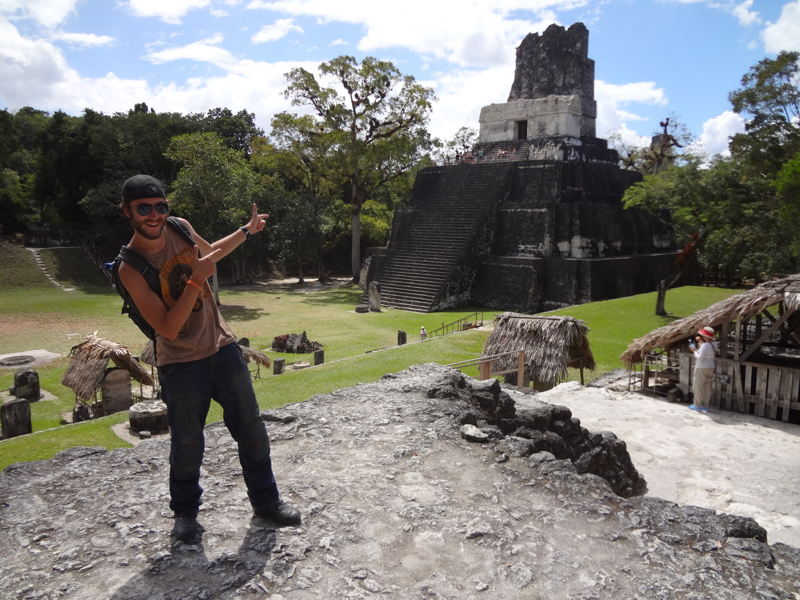 Being poor, after Tikal we rode our bikes to Flores to find a cheap place to stay. We asked around and found a place that would let us sleep on the roof. Yes that’s right, on the roof. They had this awesome set up where you paid only 25 Quetzals (like, 3 euros) and you could sleep on a mattress on the roof of the hostel.

Of course we accepted.

As it turned out, this hostel was a lot of fun and we would end up staying the better part of 2 weeks here. 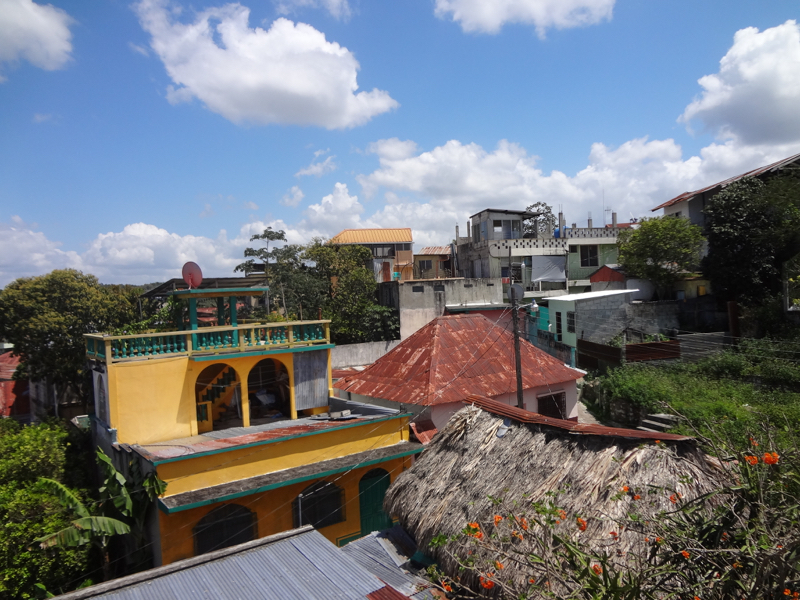 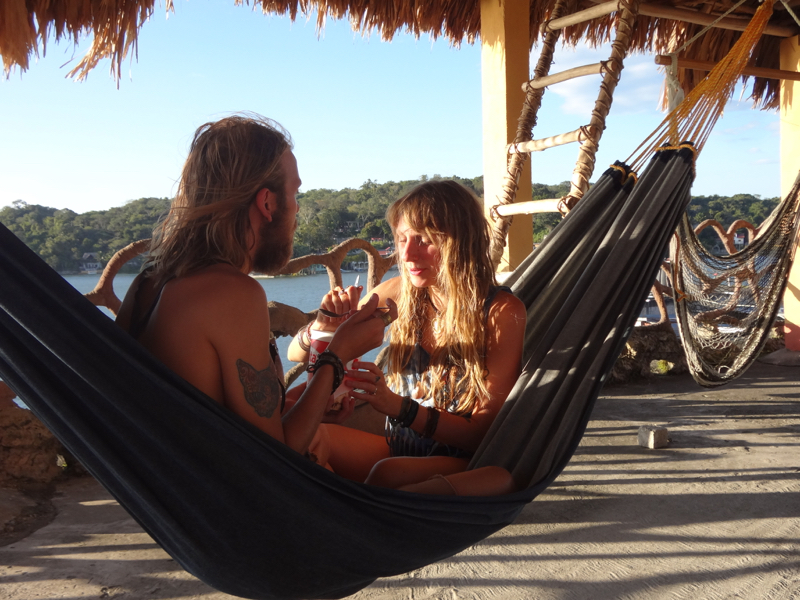 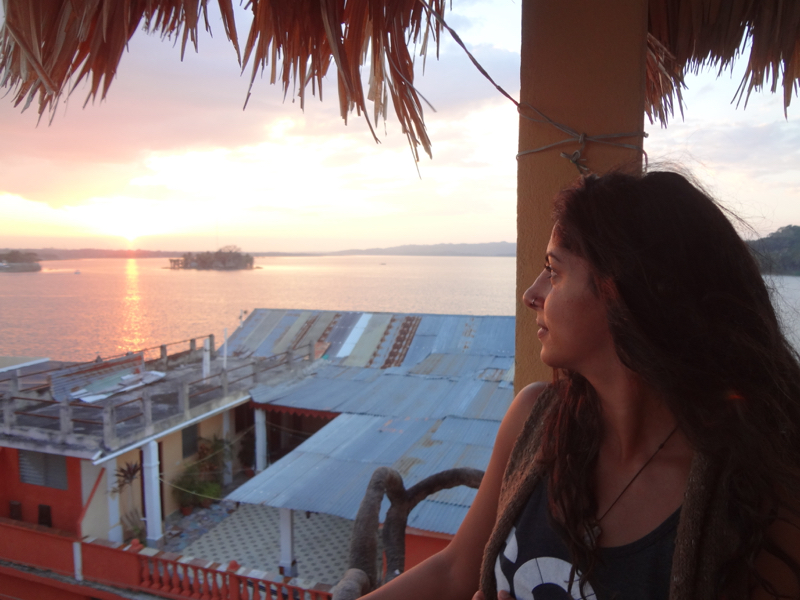 Wait a second though, TWO WEEKS?!

Well dear reader, as most things on this trip so far, this was not exactly planned. We had only planned on staying 2 or 3 nights there before heading to our language school in Quetzaltenango (SPOILER – It’s where we are now), however I dun goof’d hard.

On our second night of partying (bottles of rum for 3 euros, who can resist?) we made a mess of ourselves and went to bed. In the morning I realized that in my stupor I had managed to totally wreck one of my contact lenses when taking it off the night before. This would have been fine if my spare ones hadn’t also been fucked as well.

Nek Minnut, I have to order more from the US and wait 7-10 business days for them to arrive.

There are worse places to be stranded though. 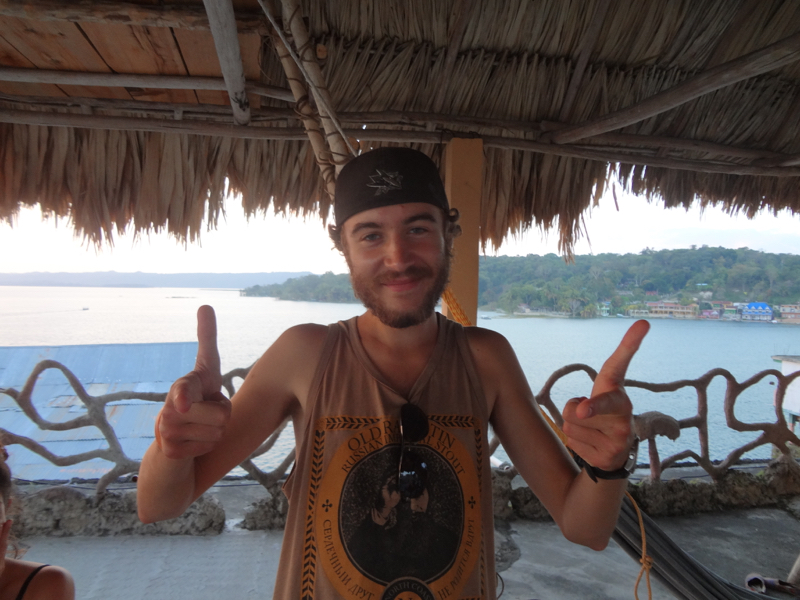 So what did we do in Flores for two weeks? Well, remember how I said we can buy rum for 3 euros? We did that.

There was a local hostel, los amigos which was pretty much the only place to head out at night. Thomas and I managed to make quite a reputation for ourselves there. Quite a reputation indeed.

One particular instance involved us leaving the hostel bar (which by the way was only for residents) to make a quick detour into the staff kitchen where we proceeded to try and steal two potatoes and two limes. We were caught and asked promptly to leave.

We would return to Los Amigos several more times after that, being generally obnoxious and unpleasant most of the time not wearing shoes. On one occasion we successfully stole a loaf of bread from their staff kitchen, myself running distraction with the guard while Thomas went in for the kill. 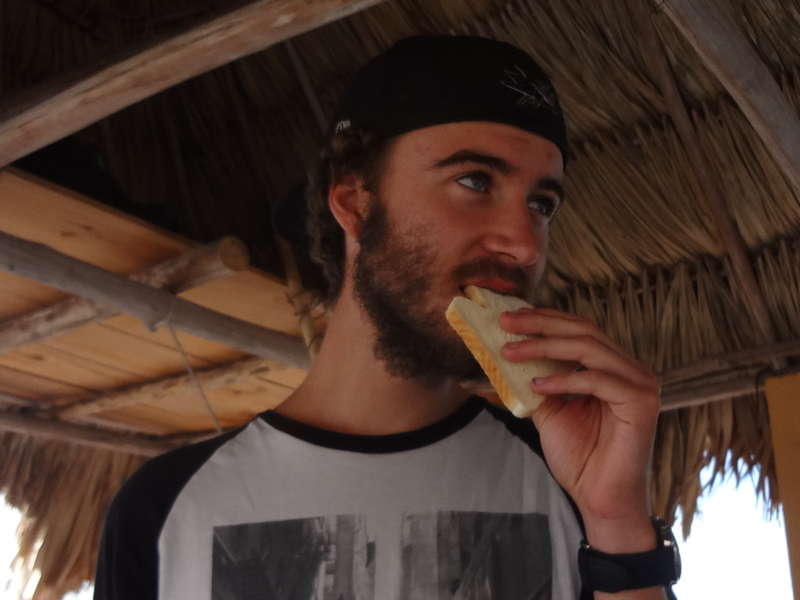 We thought we had gotten away with it, when the next night Thomas had to bribe a security guard to let us stay…they knew.

But Flores wasn’t all about Thomas and I getting shitfaced.

We also got shitfaced with a lot of new friends. 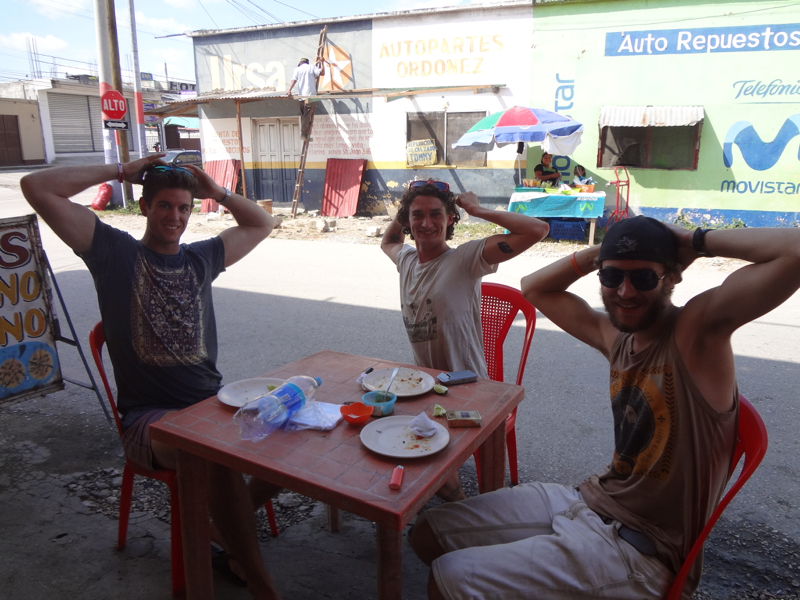 Such as Nathan (pictured above) who impressively missed his bus to Belize due to getting drunk and missing his alarm…two nights in a row.

Another item on the agenda however was fixing Thomas’ bike. Which had developed a large crack in the swingarm which from what I understand is a component of the rear suspension.

Luckily Guatemalan mechanics really know their shit, and with the bike fixed and my eye sight restored, we were ready to roll. Coming with us to Semuc Champey would be a friend we made at the hostel, Al who like us owned a KLR 650 and was doing a similar trip down to Costa Rica. 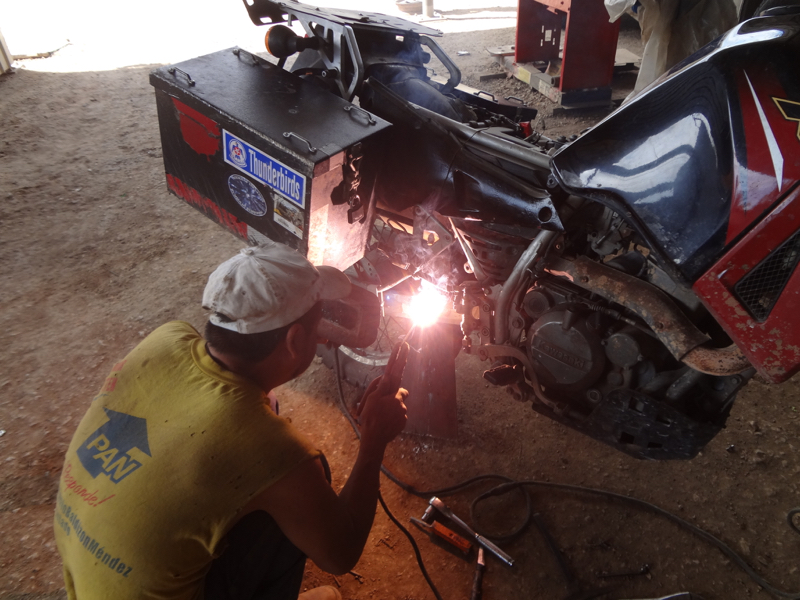 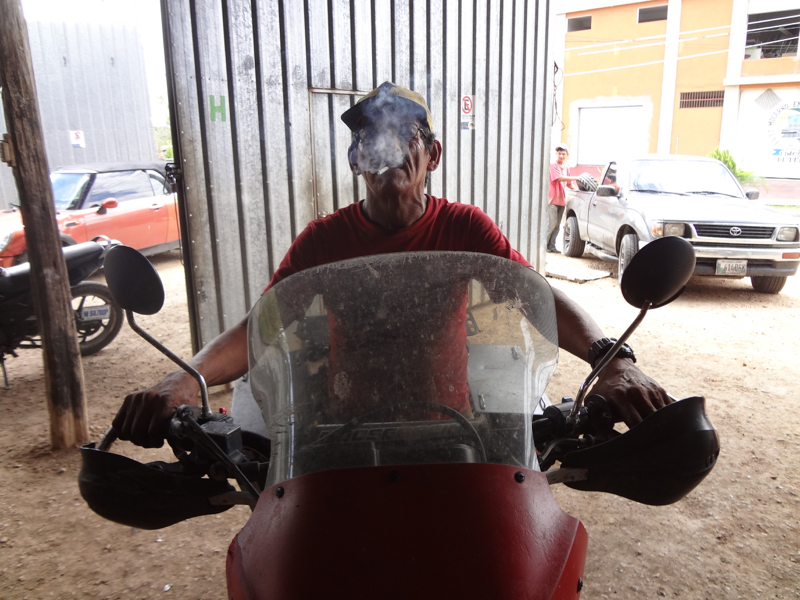 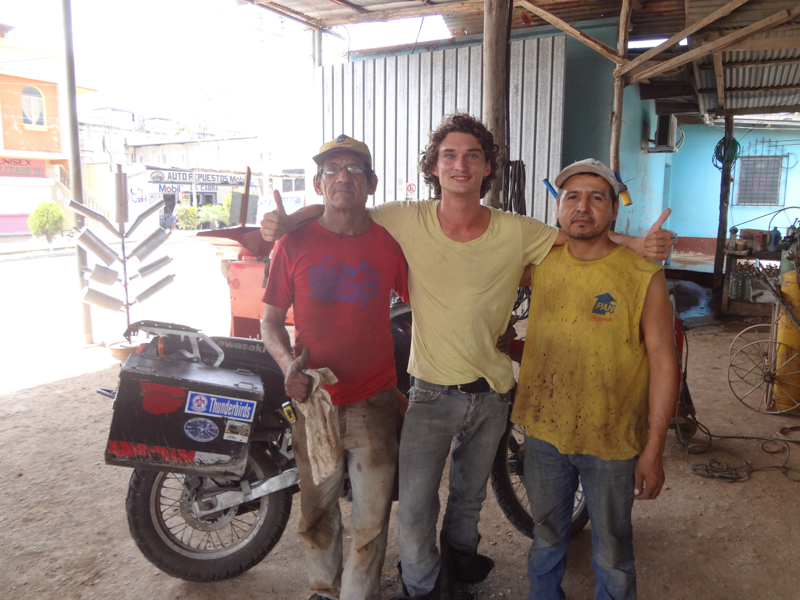 The trip to Semuc Champey was amazing, and it was a lot of fun to ride with a fellow KLR owner. A particularly challenging stretch of road was from Lanquin to Semuc Champey, with incredibly steep roads and bumpy terrain. 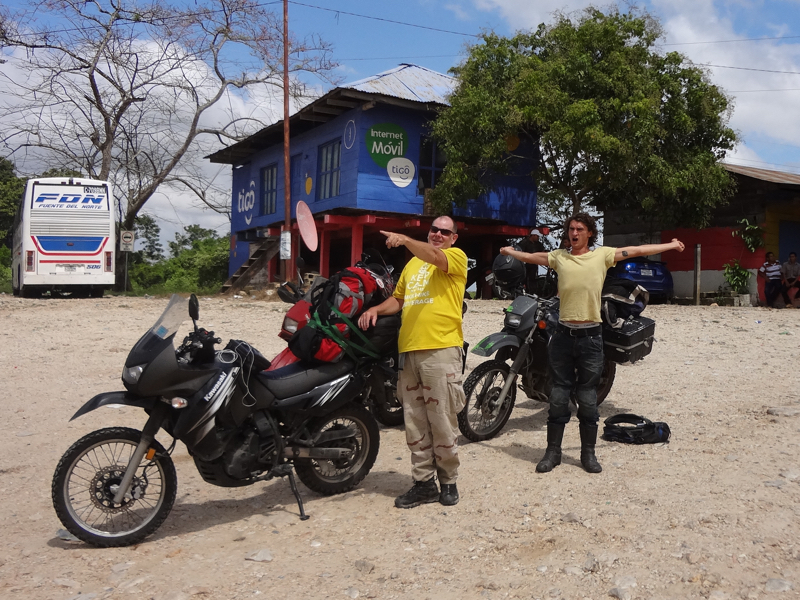 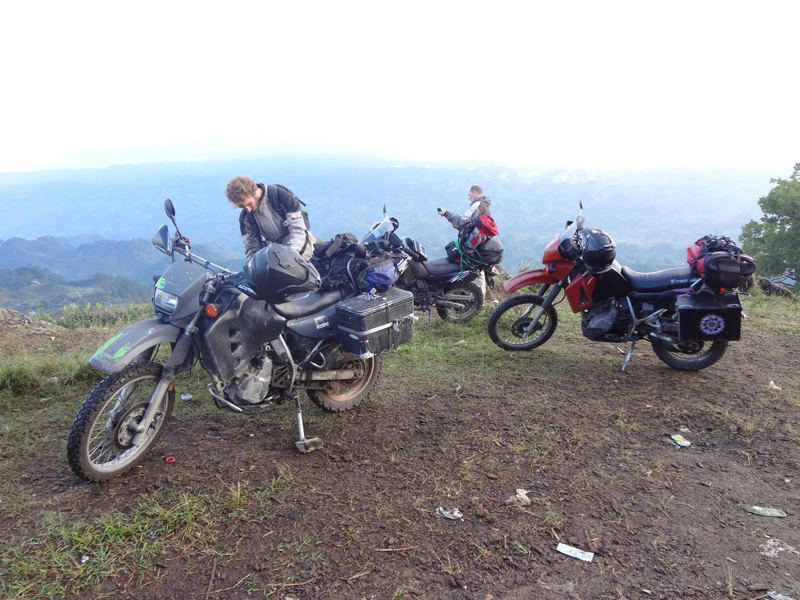 It was a long day of riding, but very worth it. We would park our bikes on a nice bit of dirt, set up our tent on same grass and go to sleep.

Yeah nah. A shitload of rain came down that night and we quickly found out that our $20 tent from Walmart is not exactly waterproof. I woke up at around 4am with my head and most of my clothes (which I was using as a pillow) in a puddle of water, while Thomas was dealing with a drenched sleeping bag and a steady stream of water on his face.

It was clear action had to be taken. We had guessed correctly that our bikes had fallen over, so in our underwear we went under the pouring rain to fix the situation (in the fall both of our mirrors broke). We went back to our tent, and carried it to a spot out of the rain, a slab of concrete under a palm tree hut. 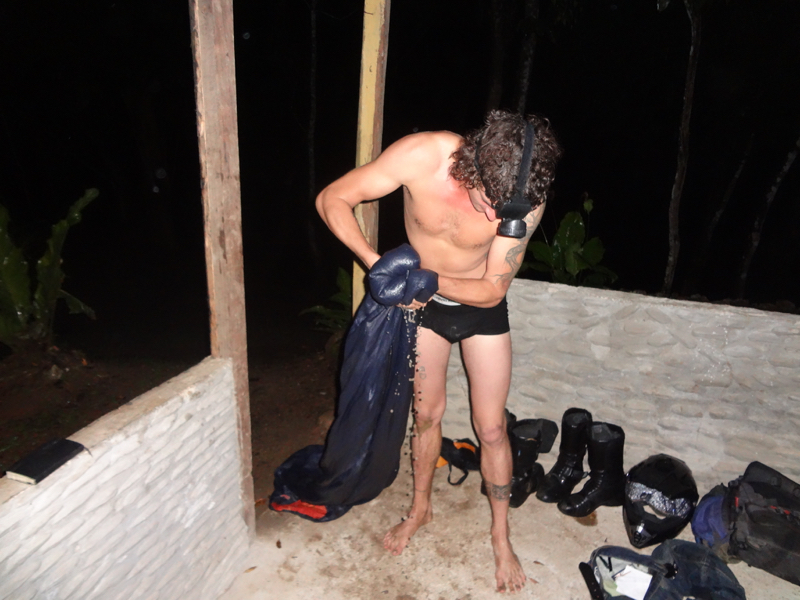 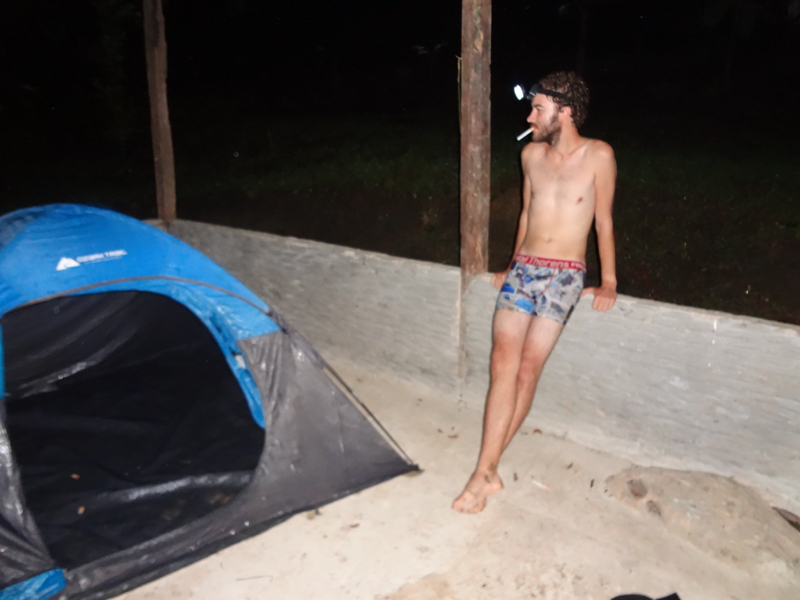 Although still technically on the gringo trail our choice of campsite, although cheap, was not exactly the “party vibe” we had been hoping for.

The next day we would see what Semuc Champey has to offer, which is really fucking awesome. 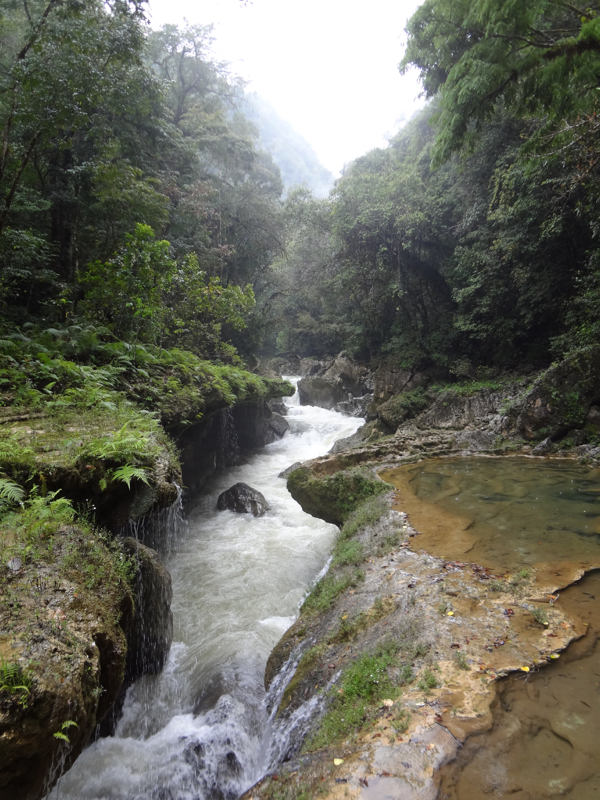 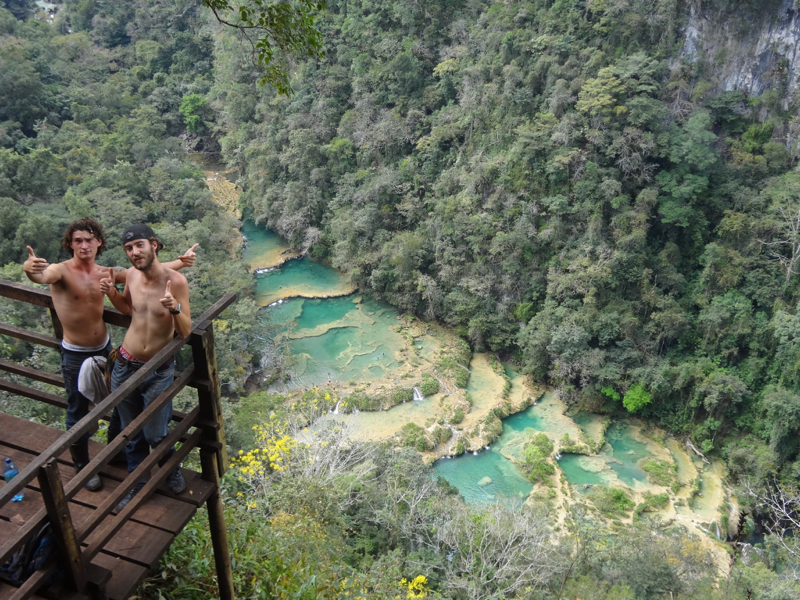 A highlight of this place was going on a cave tour which in typical central american style involved no safe guards and was done under candlelight. We swam in the caves for about an hour which was really cool.

The rain would end up keeping us at Semuc Champey for a few days, the extremely steep and rough road being un drive-able without some sun to help it dry.

Luckily though, the sun came and we were able to drive the 22kms to get out of the valley and to our next stop which turned out to be the first bit of tarmac we had seen in a while. 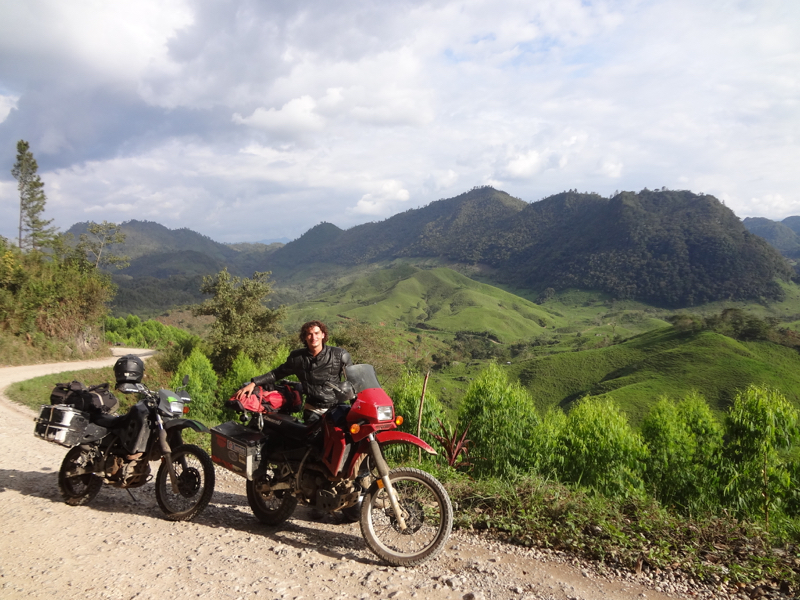 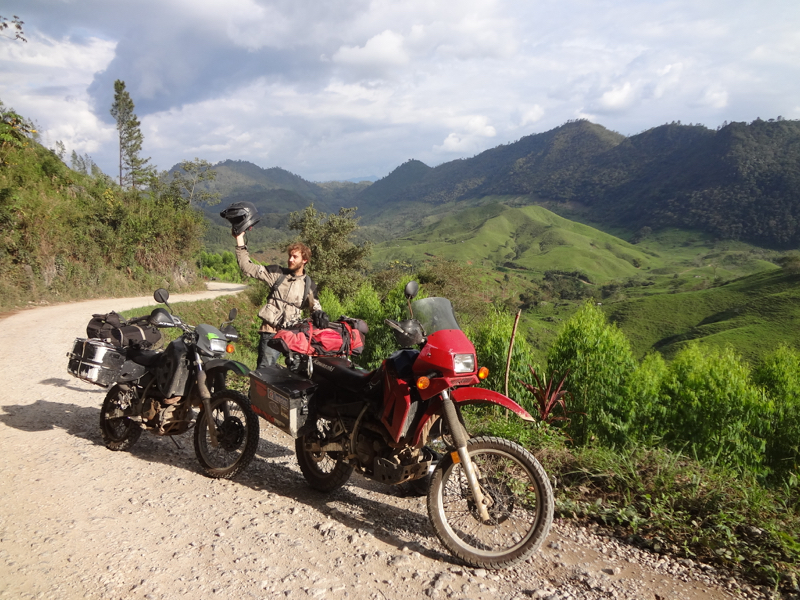 After talking to a dude for a bit, he let us stay in his hotel which was under construction at the top of a really steep dirt hill. He was super friendly, and an absolute boss. He had three workers working for him who drove off to get another bed and mattress which they carried up the hill and put in the house. 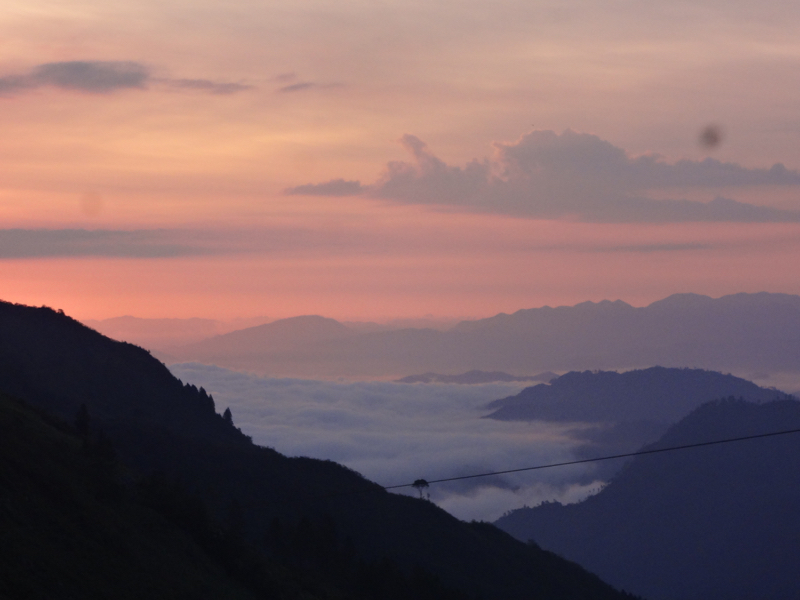 The view from our place was amazing, we rose early to see the sunrise and to prepare ourselves for the steep ride down the dirt hill. 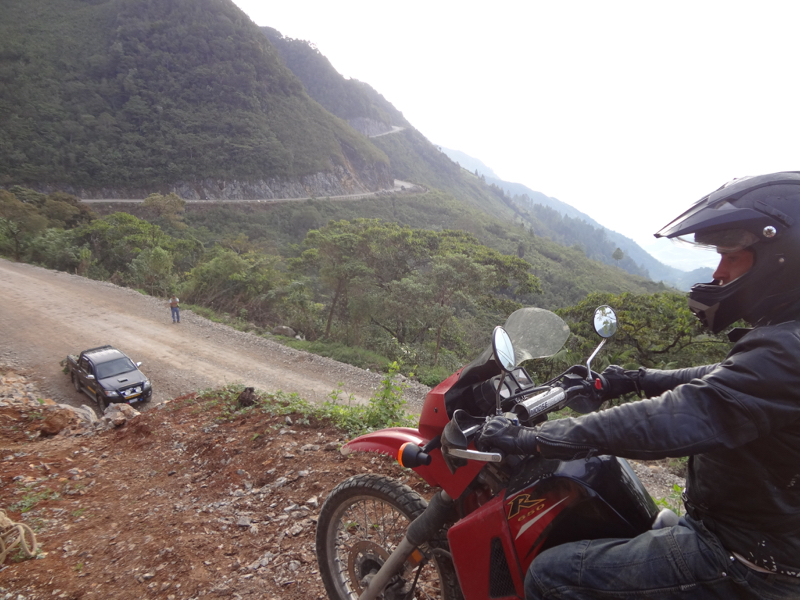 It turned out to be so steep that three men had to tie a rope to the back of our bike and ease us down the side of the hill, so we wouldn’t wreck ourselves. 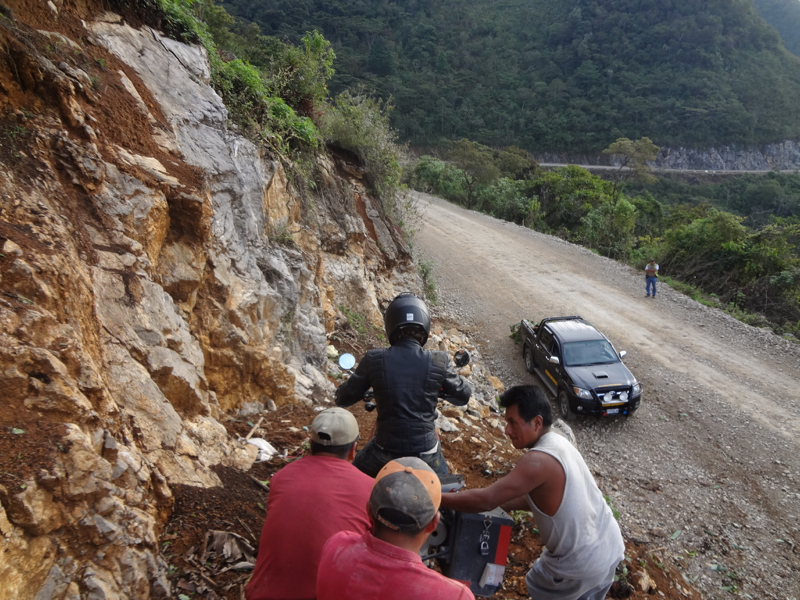 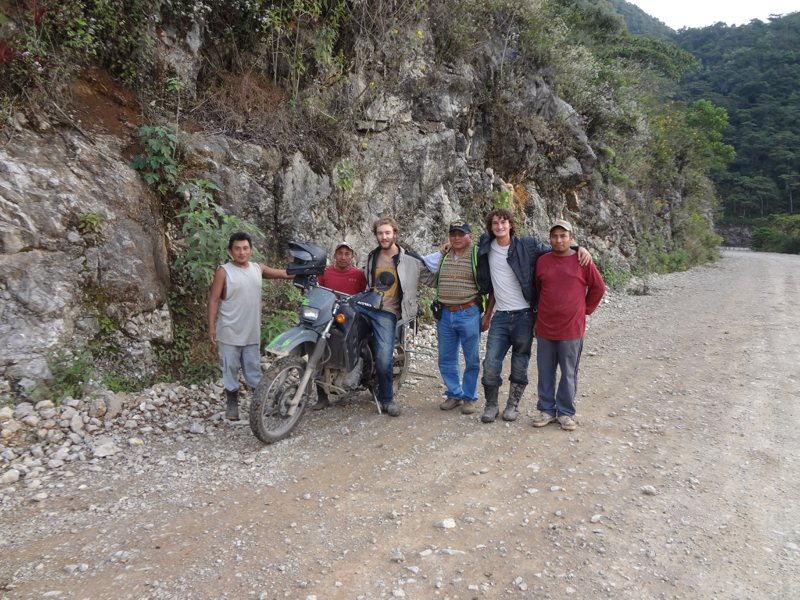 With this out of the way, and with plenty of daylight ahead of us, we made our way through Coban and towards our Spanish language school in Quetzaltenango. The 400kms turned out to be a bit much for one day, so we set up camp in Aguacatan after another awesome day of riding. 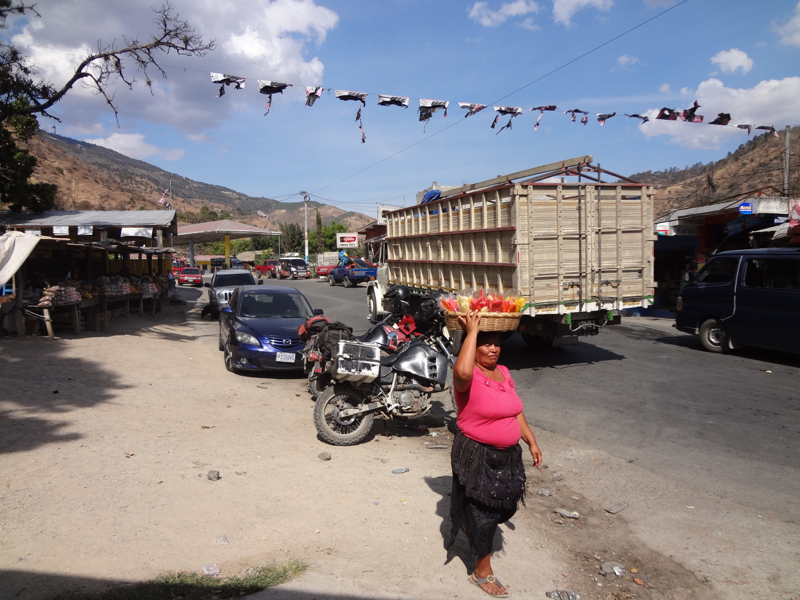 We would stop at a mechanic and ask him if he had a place for us to sleep that night. “Yeah, sure” he replied and just like that we were camping again on someone’s property, eating copious amounts of peanuts and living the bum life. 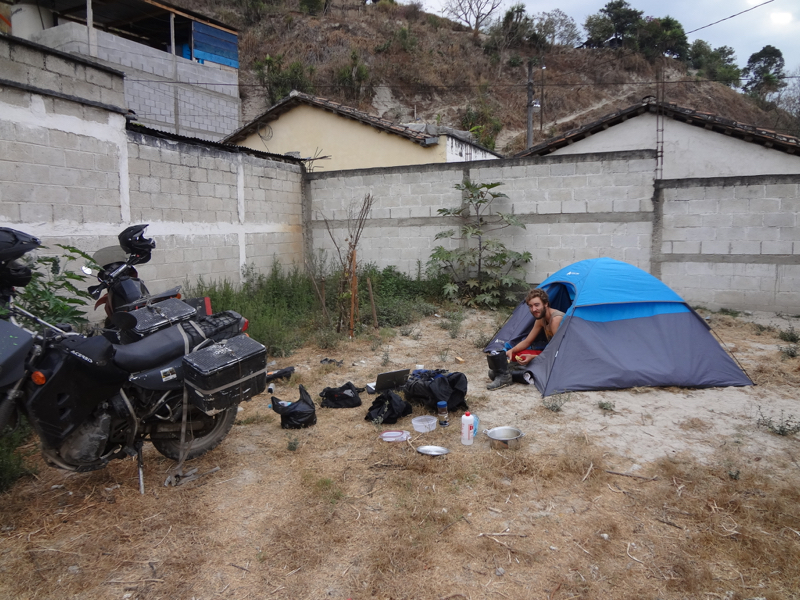 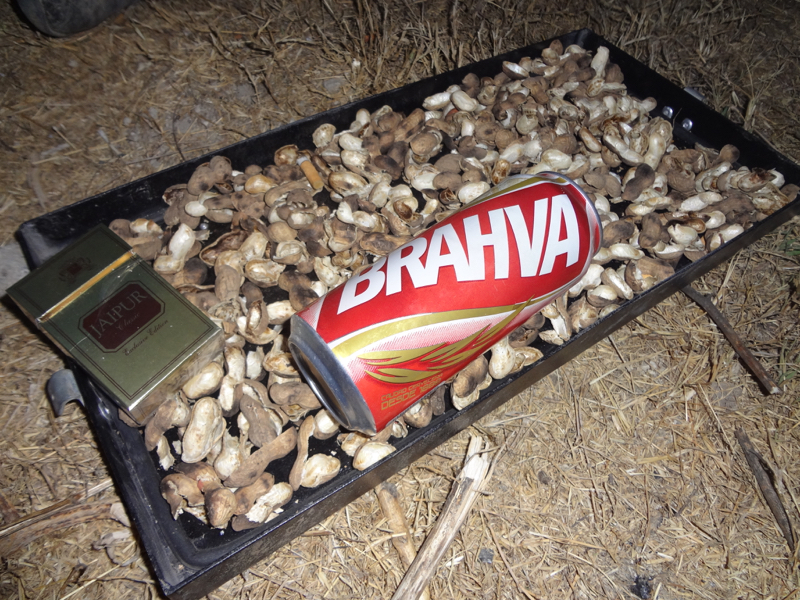 During our time in Aguacatan, we were very much looked upon as an anomaly. Two white boys with 650’s camping in the backyard of the local mechanic. This is an area where most of the people speak Mayan and tourism is essentially non-existent.

The morning of our departure we were invited for breakfast by a man who lived across the road. He was genuinely interested as to why we would travel, what traveling is like, and what the fuck we were doing in Aguacatan. The rest of his family, although they spoke Spanish, just looked at us with disbelief and smiled. 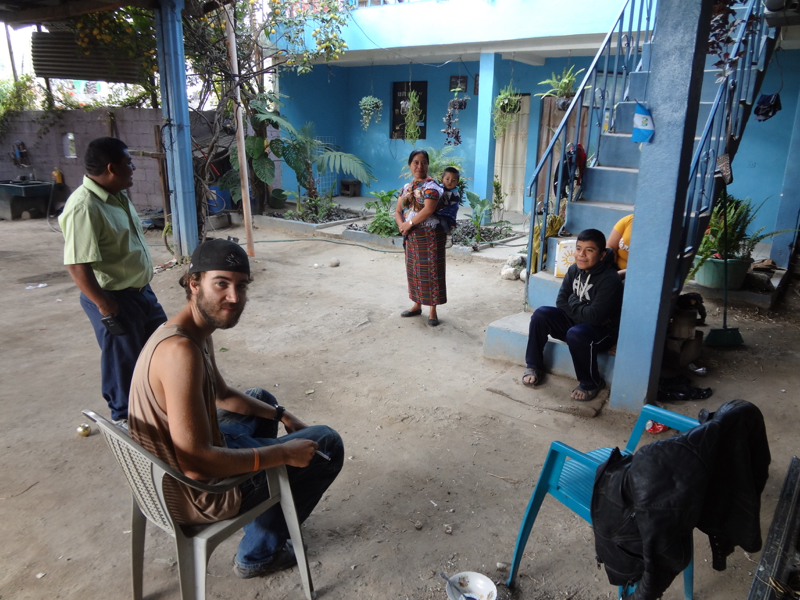 In stark contrast to our time in Flores, being in Aguacatan as well as Semuc Champey and where ever we were in that hotel proved to be very much not the gringo trail. We had a great time in Flores, however travel is all about having a mix of the two.

Personally, I think traveling should be about partying with other travelers and making a mess of yourself because I’m not ashamed to say that I find that fun. There is a certain air of freedom that comes with staying in hostels and partying with english-speaking party animals. That’s just the gringo trail.

The other side, unfortunately is one that many people without their own means of transportation will never see. Riding a motorcycle opens up new doors and you get to experience things you would never get to see going by traditional public transport. Here the perfect example was having breakfast with a Guatemalan man and his family in a small town after a night of camping in the backyard of a mechanic.

From here, not much else needs to be said. As I’m writing this, I am lying in a bed in my own room, staying with another Guatemalan family in Quetzaltenango. I’m going out partying tonight with English speakers and that’s ok. That’s just how I travel.

Tomorrow I’ll be at the Spanish school learning about Central American history.

And the cycle continues…

3 thoughts on “Welcome to the Gringo Trail”