It was supposed to be our last day in Mexico when we met Miguelito. We stopped in a town called Bacalar to get some gas and we ran into this hippie-ish, 60 year old looking dude who was also getting gas. He told us about his campamento, not far from the gas station. That random encounter happened about one month ago and we’re still here, in The Botadero, Paraiso. 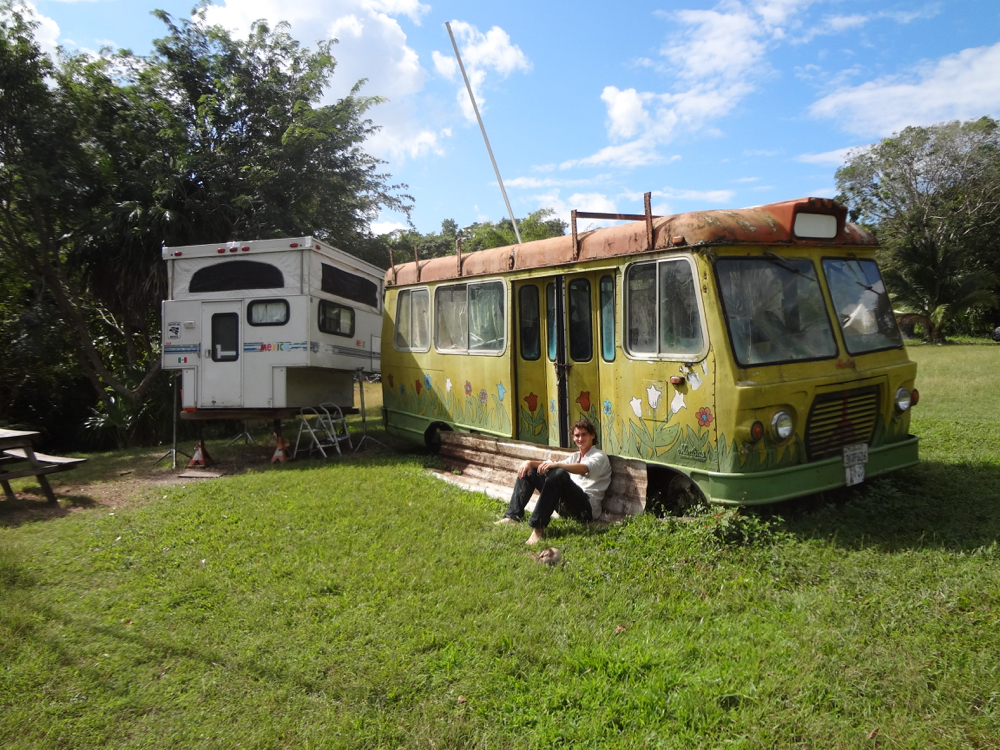 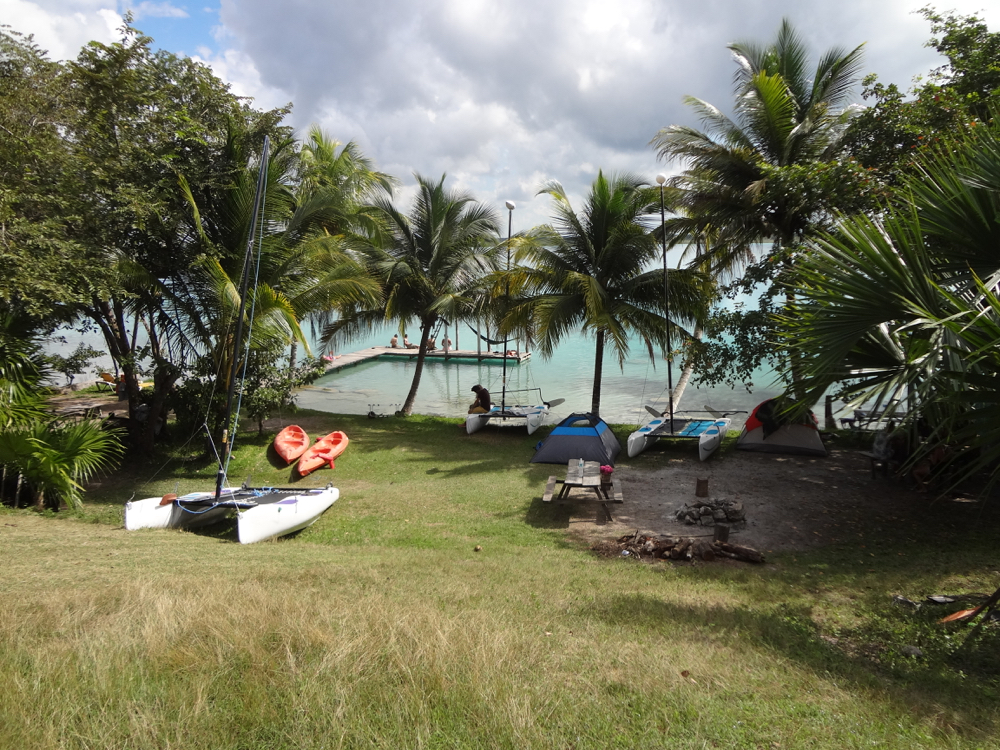 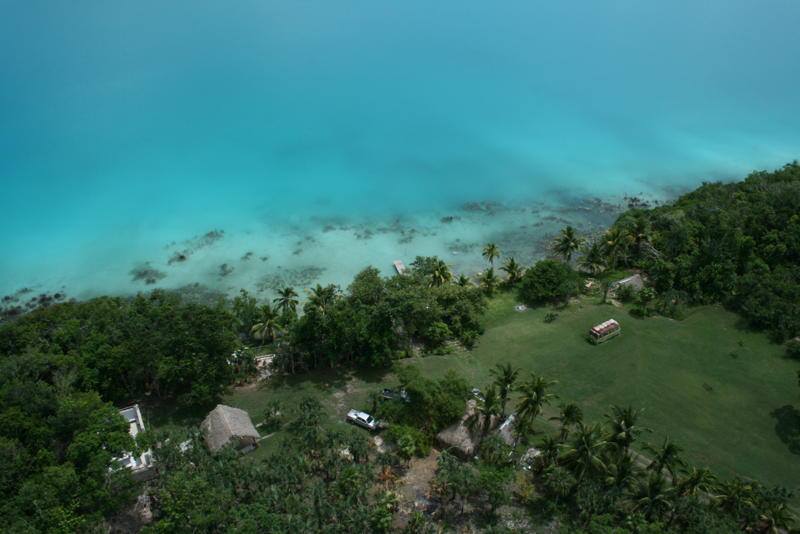 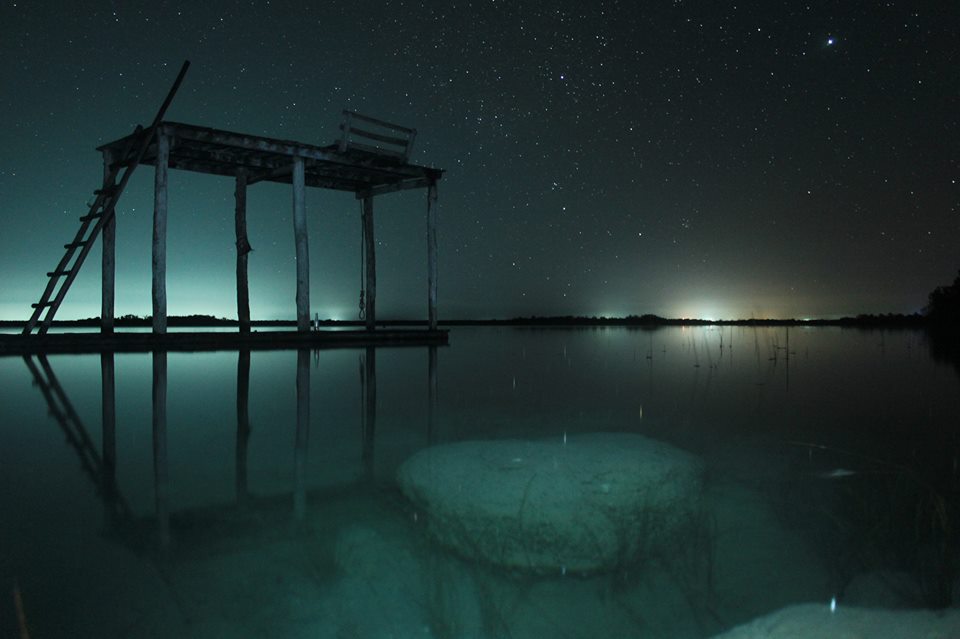 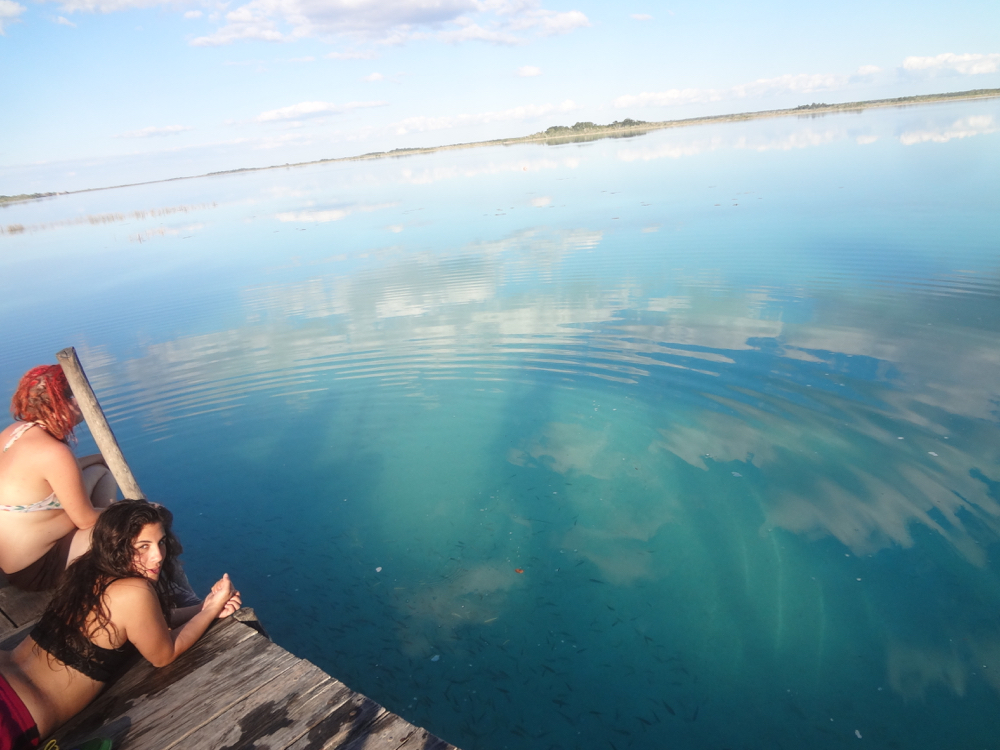 Why we call it Paraiso. 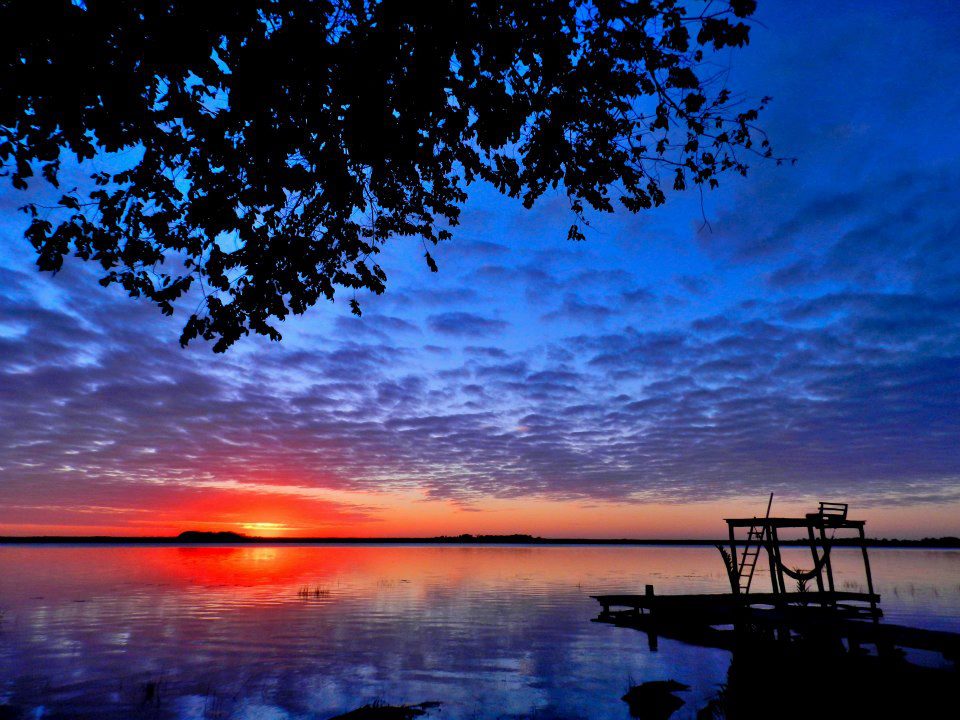 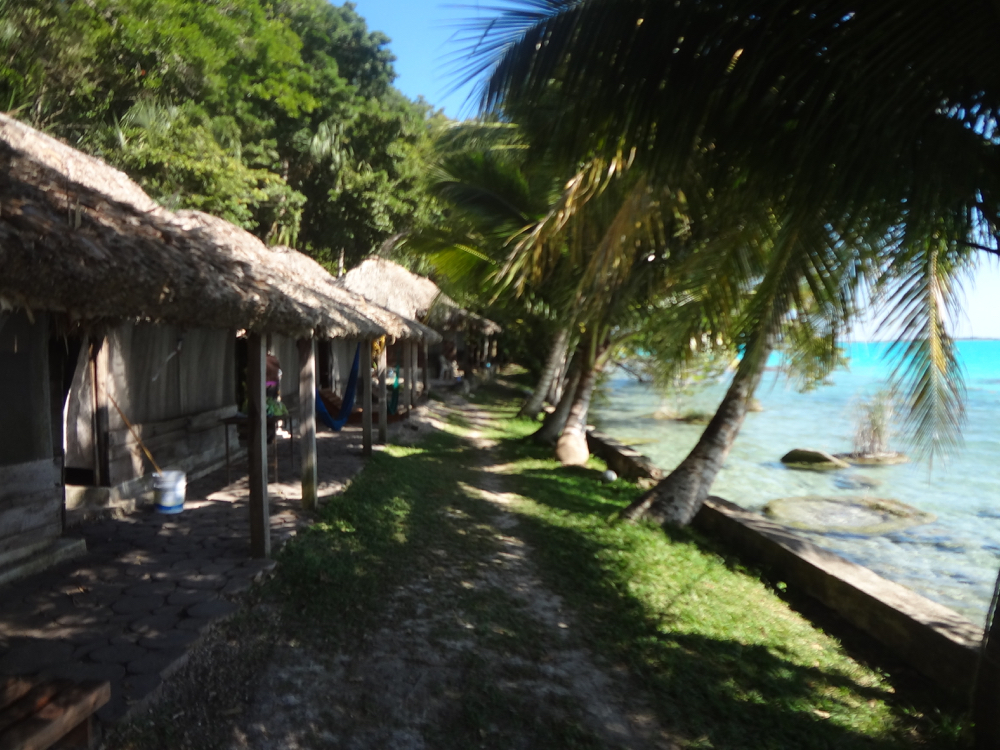 Some of the cabañas that are for rent.

Getting there wasn’t that easy actually. It had rained hard before we got there, which had made the 1 kilometer long jungle road very, very muddy and slippery. In addition to that, it was dark. After I fell down for the second time, we decided to park our bikes in the jungle and walk the rest of the road.

We couldn’t see anything when we got there. There’s no electricity, so no lamps, just candles. But we heard a familiar voice offering us some pasta that he just cooked. Miguelito. 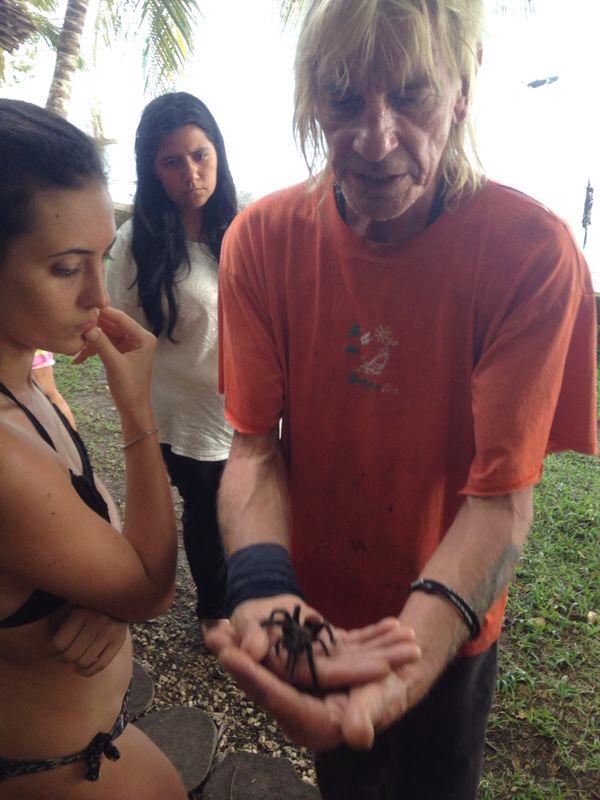 He will deny it in seven tongues, but he is the fearless leader of the Botadero. He makes the place. “Why is it perfect? Because we make it perfect ” – as he would say. He greets every visitor, even (especially) the ones that don’t like it with a box and a hug. Everyone that leaves gets a two hour story about the train (the world) moving into the new era of light since the 20th of december 2012.

First we thought he was a hippie. He’s not. There are some considerably hippie aspects to him: loving nature, studying 500 indigenous tribes about the new era of light and of course his looks.

But too call him a hippie cuts him short. It also doesn’t really make sense anymore when you hear some of his course and vile British humor. He’s a rockstar. Julien accurately called him a cross between Keith Richards and a Mayan spiritual guide. 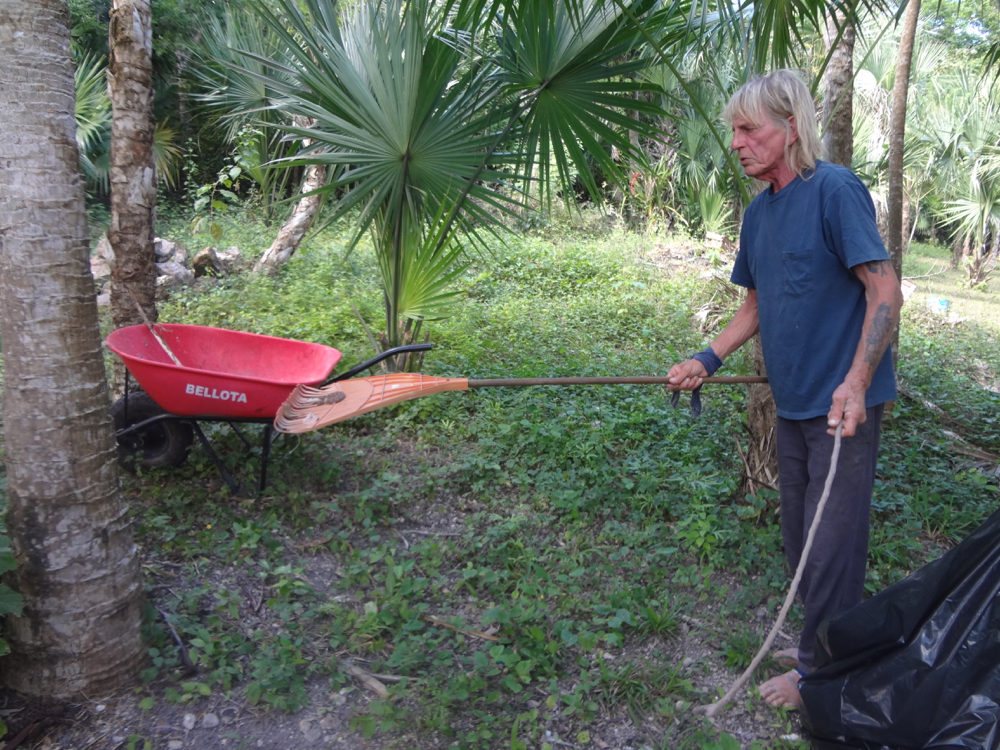 This is him in full glory, holding one of the world’s most poisonous snakes, the Barbra Maria. If it bites you, you’ve got about two hours to live. A few weeks later he actually got bitten by one of the these and I had to race him to the hospital in Bacalar on my bike. Not that he wanted to go there, he only went because everyone insisted. He thought that his body could handle the poison. And even if he would die, he wasn’t afraid of that anyway.

And fair enough, he didn’t end getting the antidote in the hospital, because the doctors didn’t think he needed it. He was supposed to be there for observation for 5 hours, but after 2 hours he wanted a cigarette and was tired of the whole situation, so he ripped out the IV and made his way back to The Botadero. 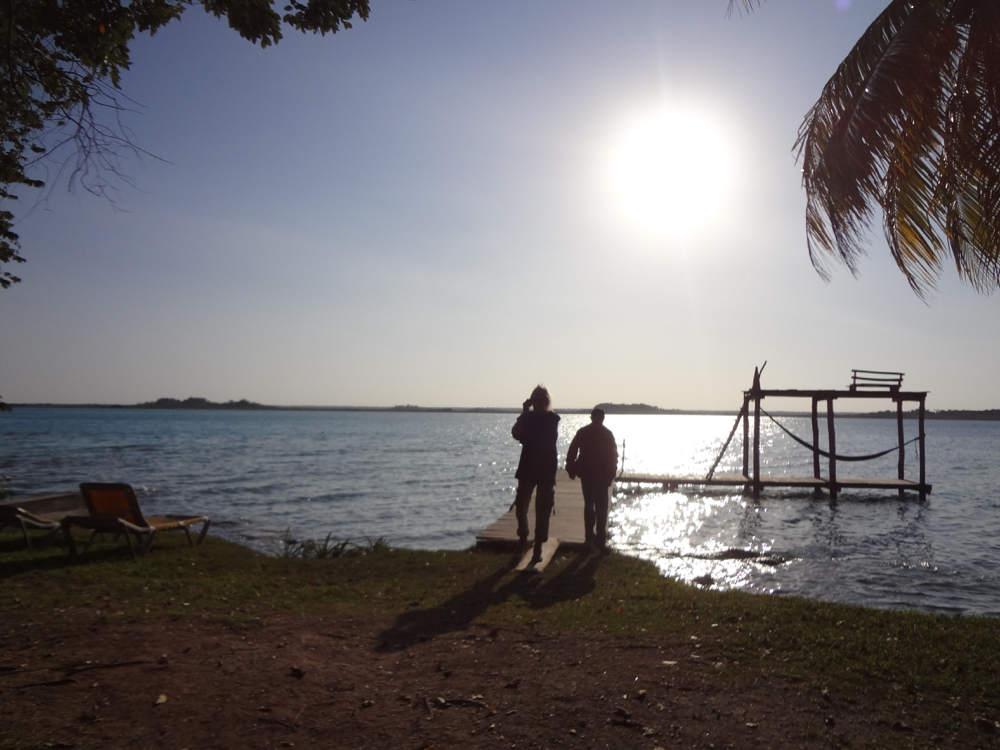 Here he is on the phone on the morning of my birthday, organizing a pirate competition. He called up three hostels on the same lagoon, challenging them that whoever would be the first to arrive with a boat full of people would get a line of cocaine and a tab of acid.

So what the fuck have we been doing here for a month?

We started volunteering. We work a couple of hours per day doing a variety of tasks, in return for lodgment, food, cigarettes, beer and weed. A very fair deal, especially when it means you can be in paradise for as long as you want, because you don’t have to spend any money. 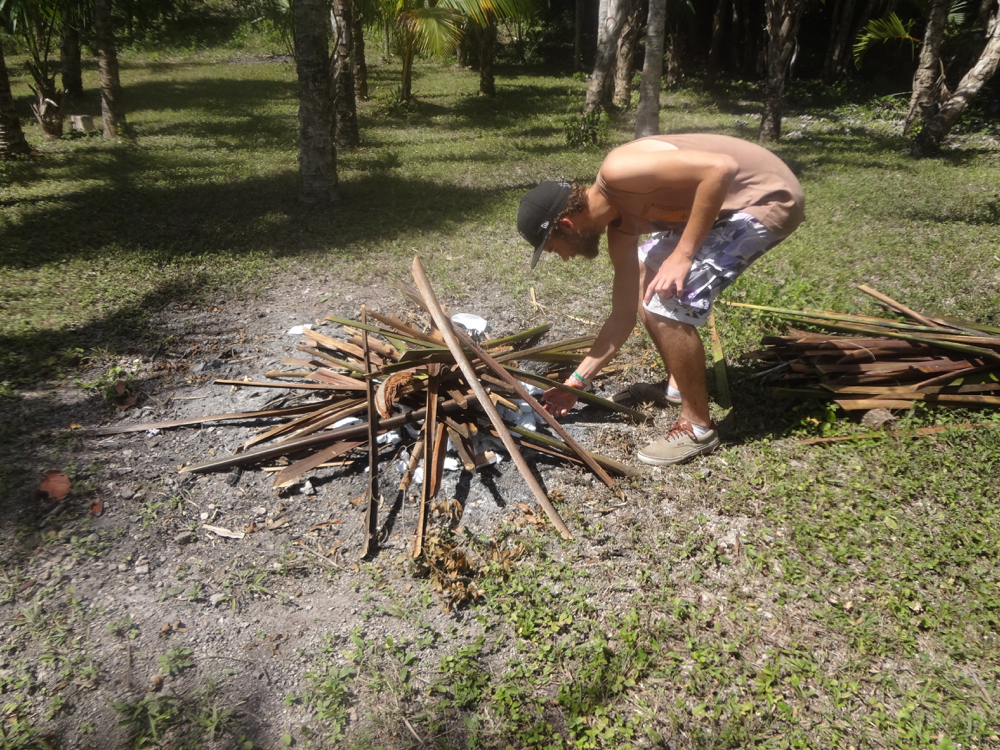 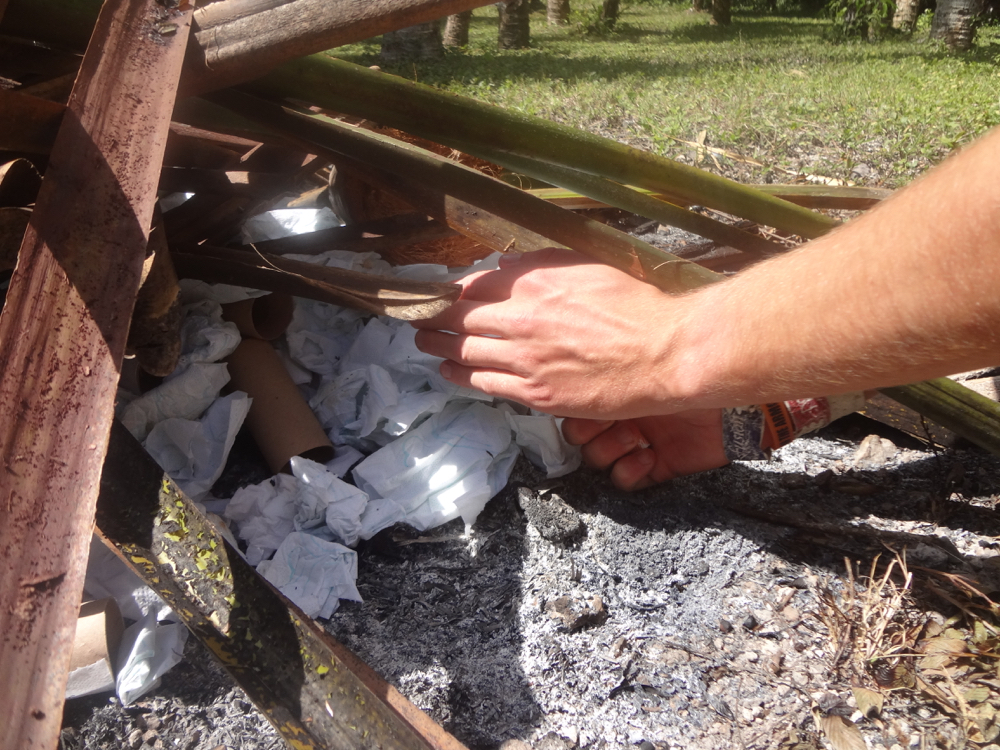 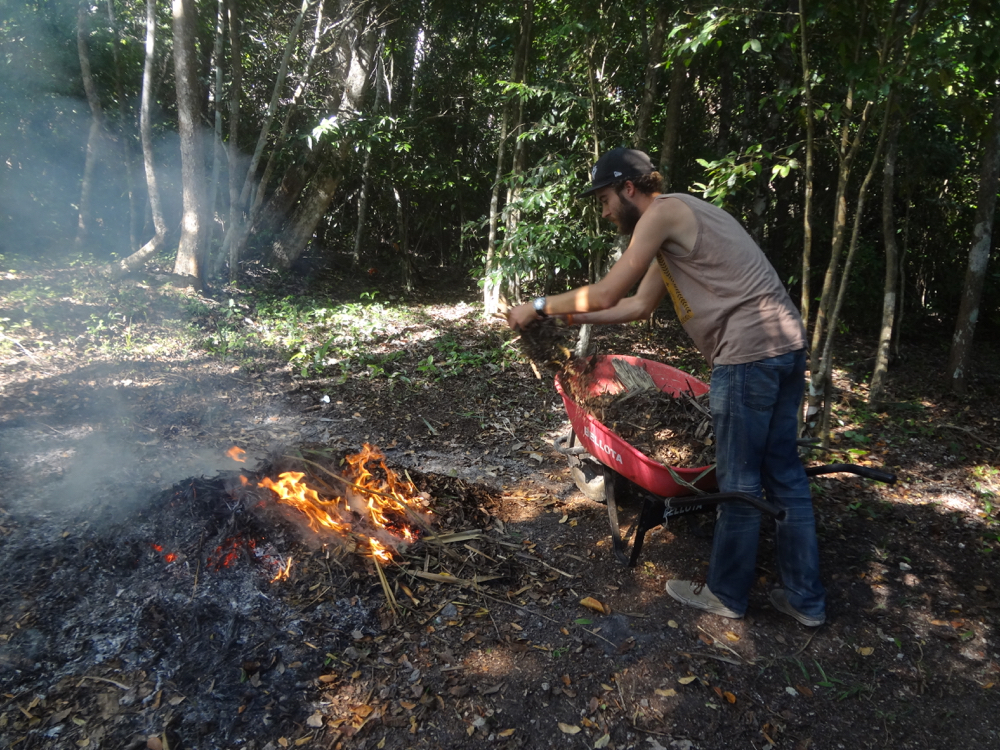 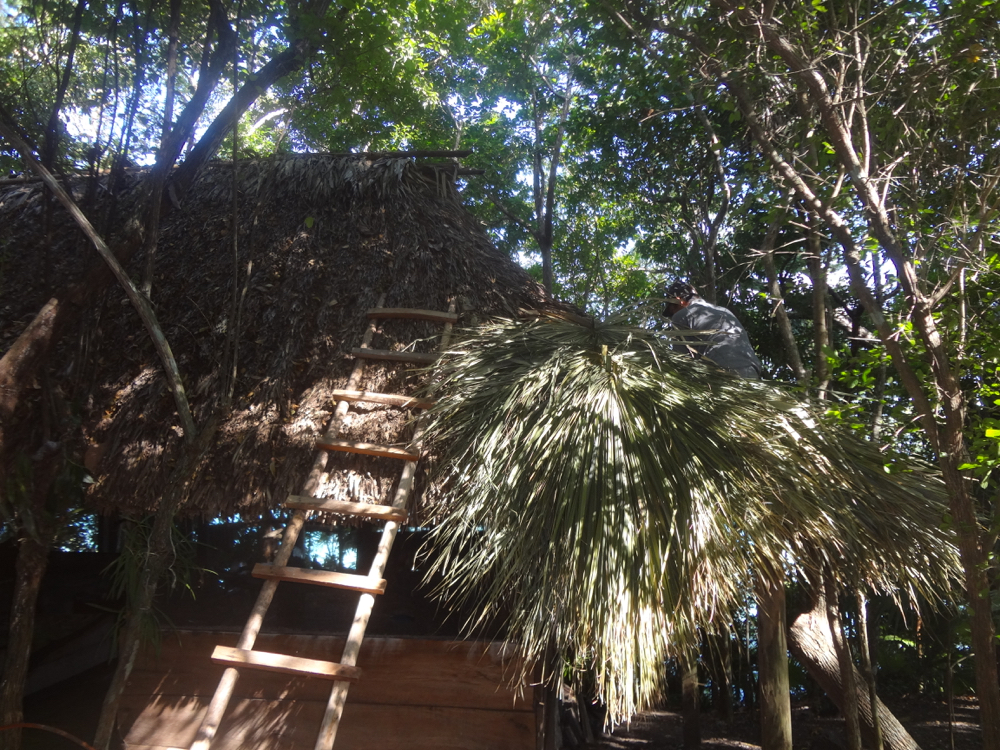 Here you see our jungle god Romeiro at work, constructing the roof of a cabaña. This guy grew up in the jungle and knows -everything- about it. He built pretty much all of the buildings and furniture at The Botadero himself. 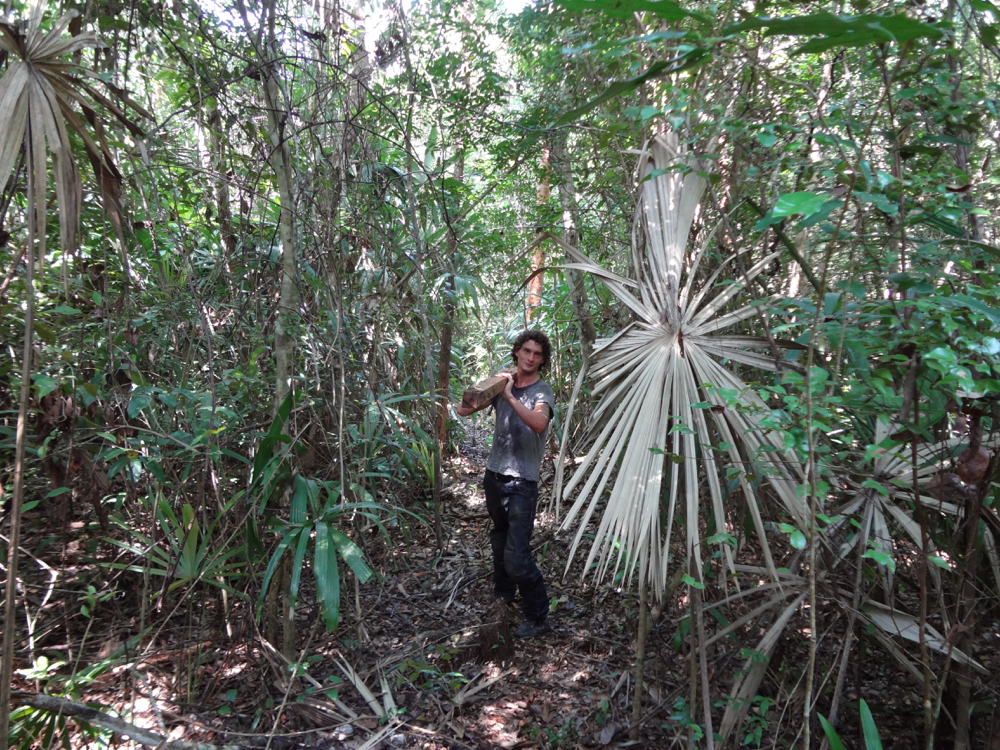 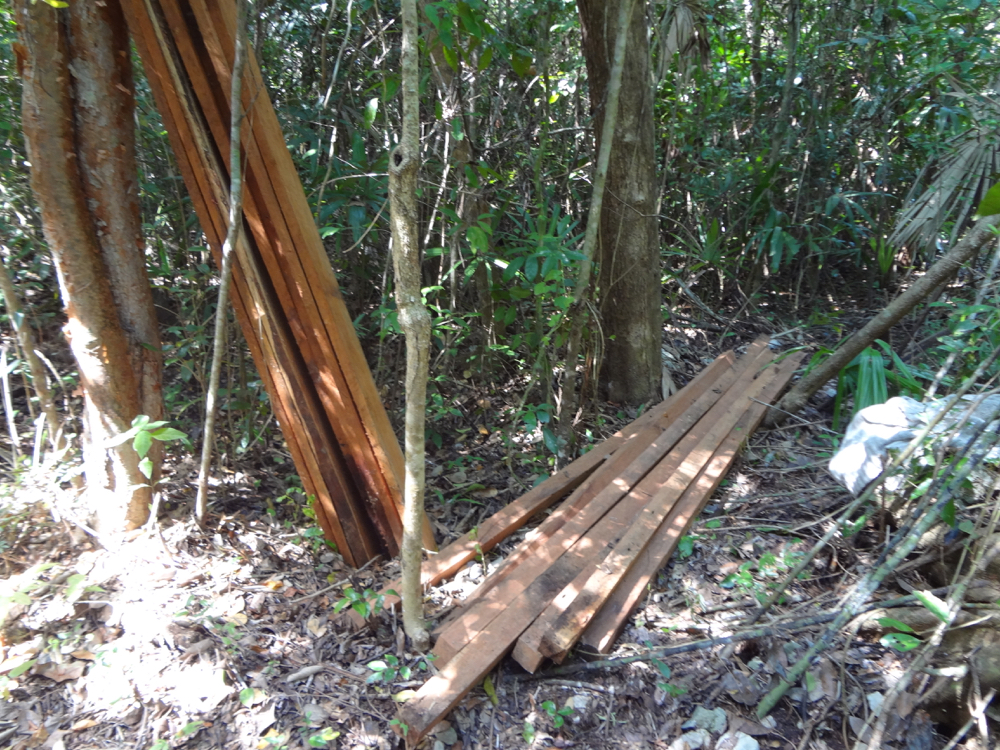 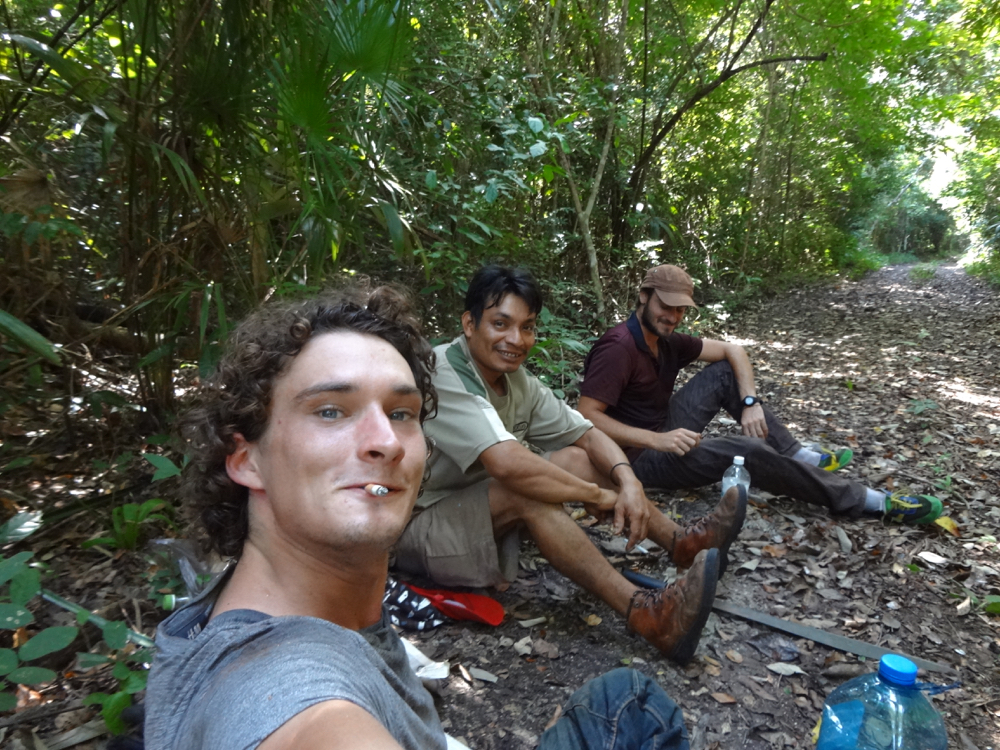 Here I’m helping Romeiro carrying wood that he cut in the jungle, for the construction of a new cabaña. The other dude in the picture is the French Thomas, friend and ‘colleague’. 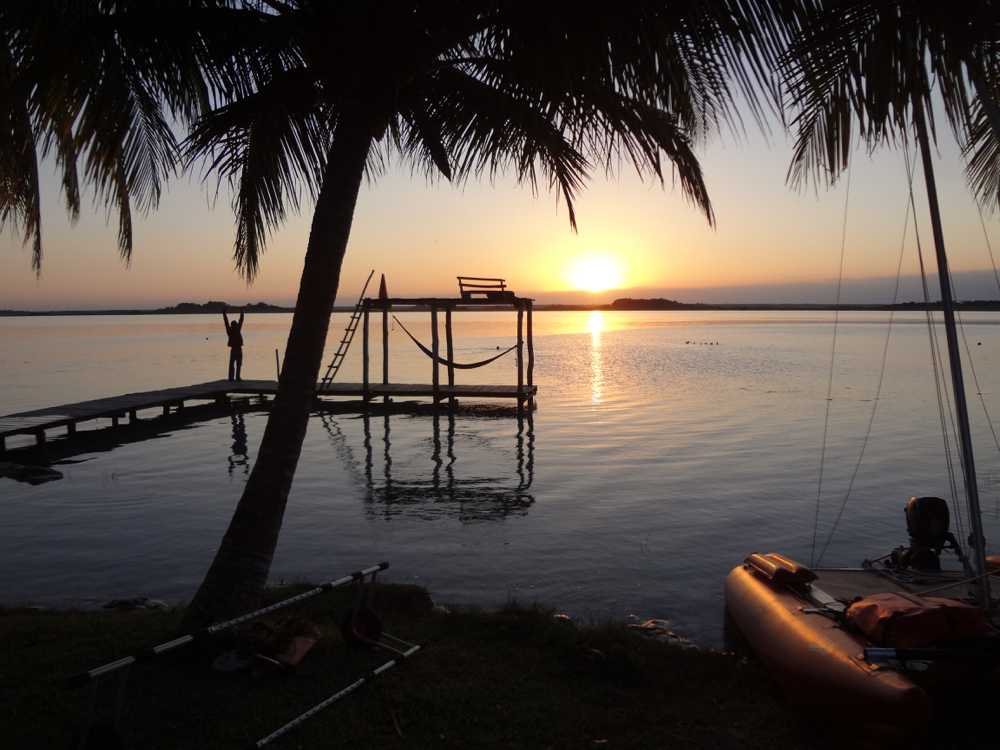 On most days we get up around sunrise. There is no electricity and lamps, so you want to get the most out of the sunlight. 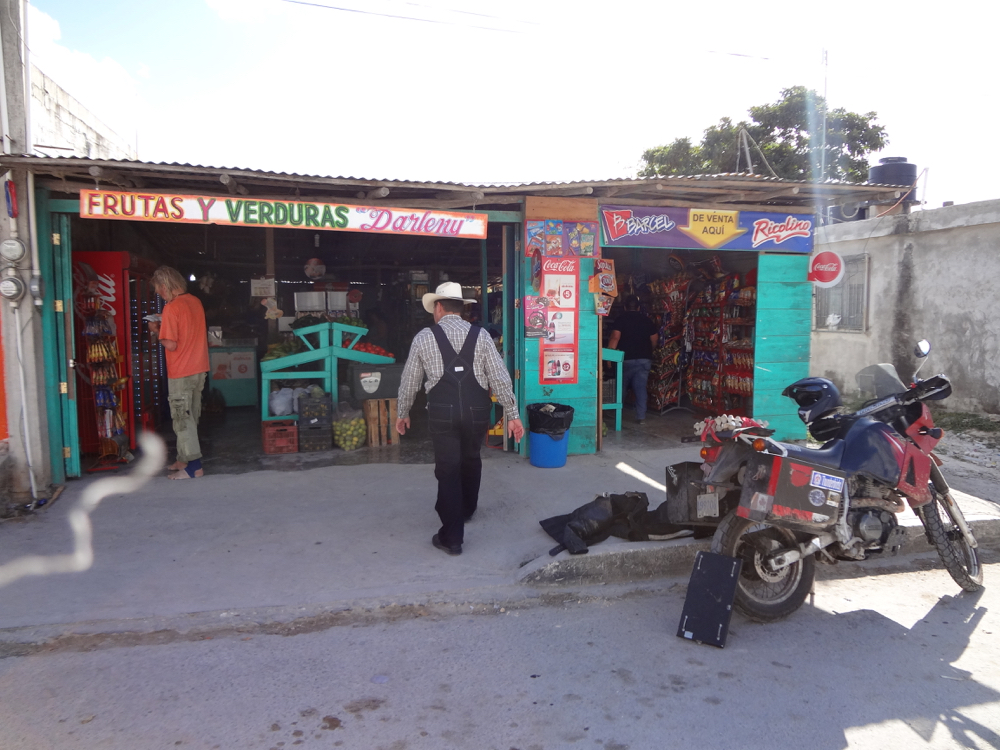 Part of our tasks is going to town every day to do groceries. Notice the tray of eggs strapped on the back? That’s been done like 20 times and surprisingly they only broke once.

Why would you work for that little money? Especially when I could easily make 20 times that in Europe? A feeling of reward.

When you make money in the developed world, it disappears into your bank account at the end of each month. Then you take some money out of that massive bank account and spend it on for example, a beer. You have no idea which work earned you that beer.

Here, you stomp down empty beer cans because you get 10 pesos (0,50 euro) a kilo for them when they’re crushed (hard work). When you bring in the crushed cans to the town, you spend all of the money on beers, that you drink that same afternoon. You know what you’re working for.

It’s exactly the same concept for all of our work here at The Botadero. Cleaning toilets and the kitchen is really not work that’s a lot of fun to do (it’s not that bad either), but rather than some money in a bank account, it gets you another day in paradise. That’s a feeling of reward.

And here’s a funny thought: even if you don’t have any money you can live and volunteer here for as long as you want. You don’t need money here. This is financially rock bottom. If that career doesn’t work out there are some pretty good alternatives. 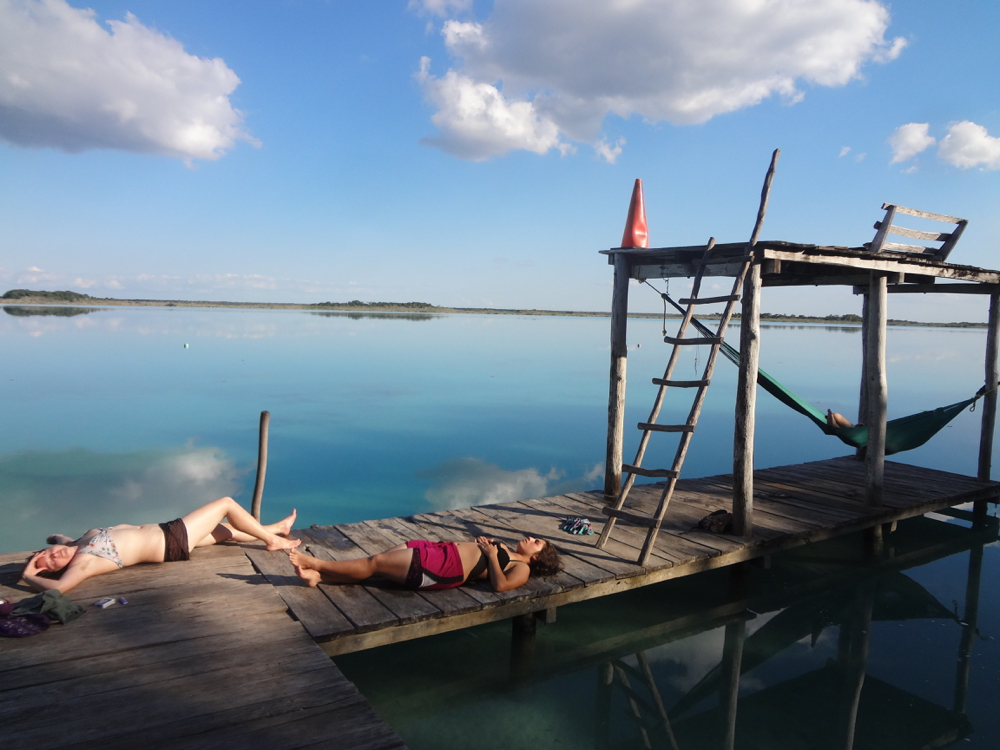 Our friends and former colleagues: Cat and Emma. By now the’ve moved on to the west coast of Mexico. 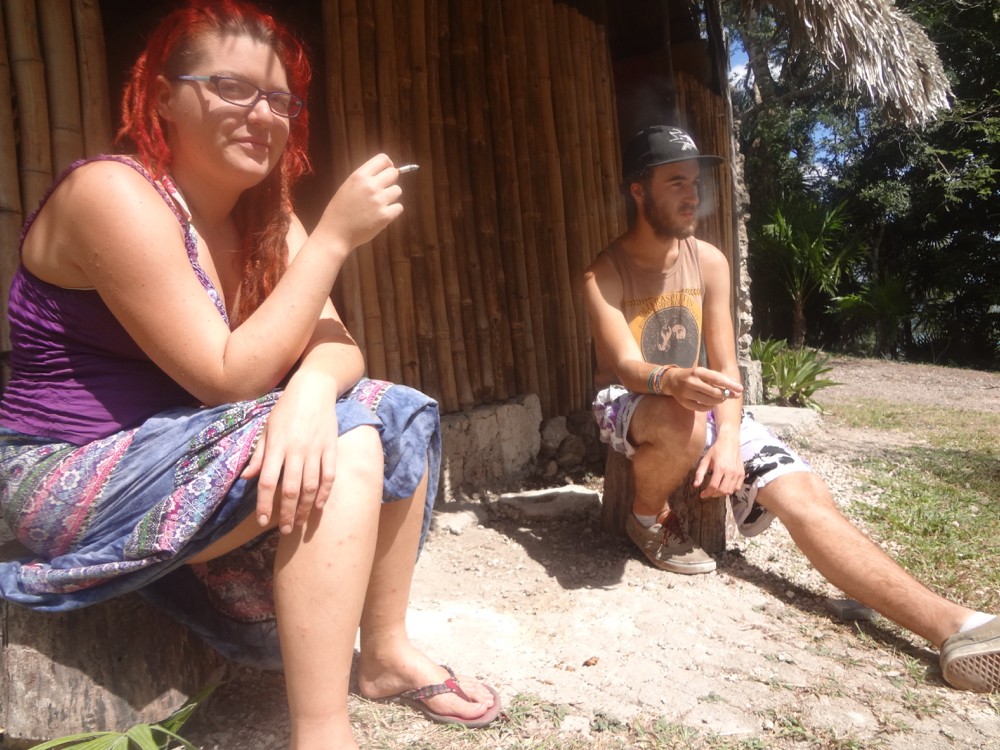 Julien and Cat taking a break after some hard work. 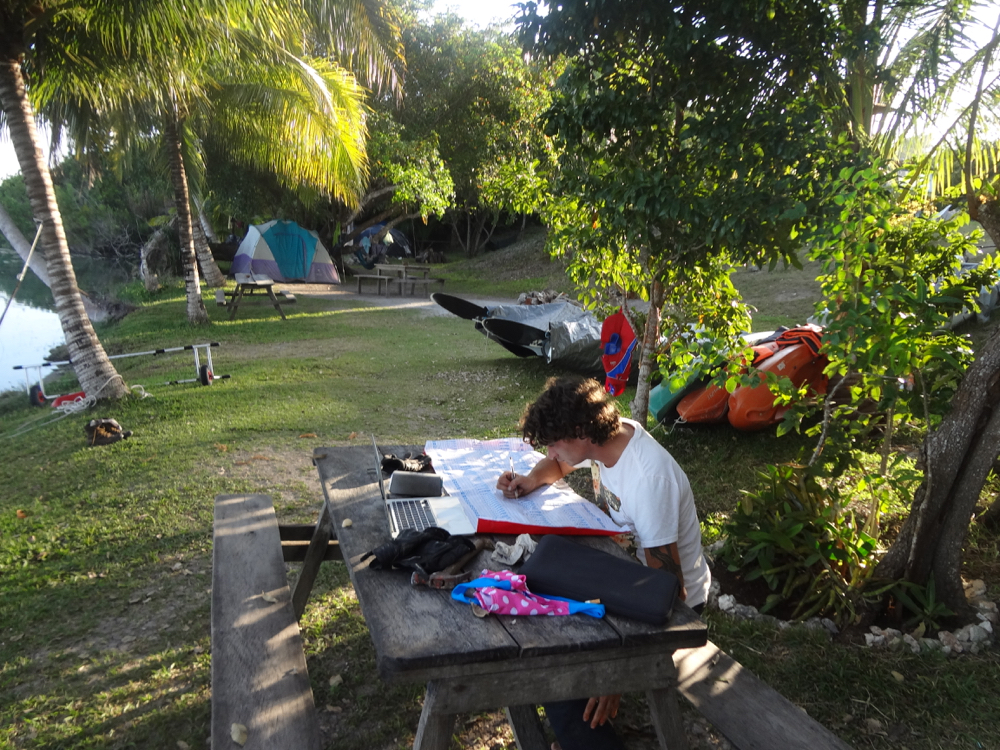 Working on some decorations for my bike. 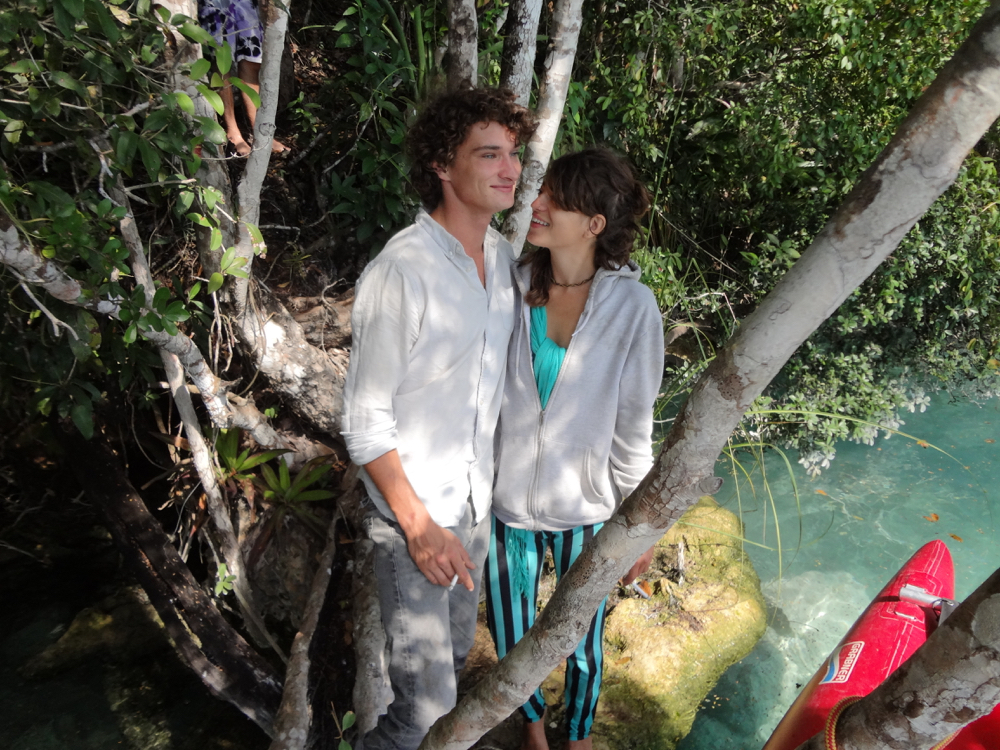 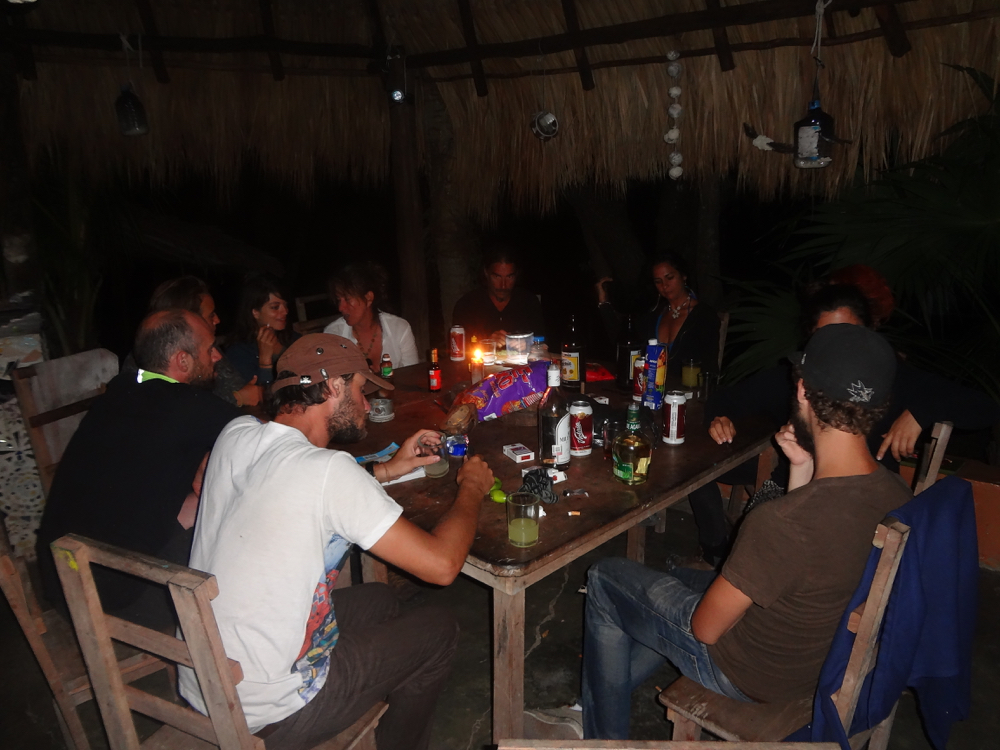 What most nights look like. Drinking in the kitchen. 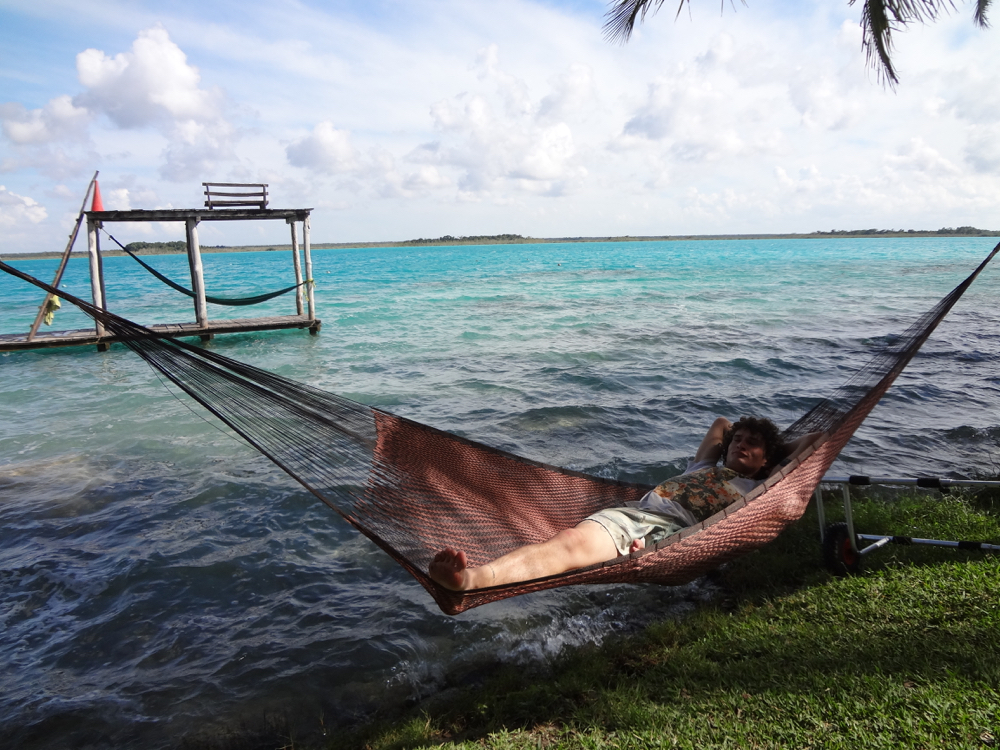 We’re getting good at doing nothing here. There is not much to do. No wifi. No electricity. Not close to any bars or towns. We don’t even have any books. Yet, we’re not bored. It’s funny. When I’m doing nothing in Amsterdam on a Sunday I’m incredibly bored. Here not at all and there’s nothing to do all of the time.

I think doing nothing isn’t boring here because there is nothing to do. And everyone is doing nothing. When you’re in a city like Amsterdam with all these amazing events going on, hundreds of bars, thousands of hot girls you haven’t met, nice restaurants, new stores that opened, networking to be done, boat trips to be made and … YADA YADA YADA. There is so much!!! And all your friends are doing so much as well! You get the feeling you always need to be doing stuff.

Here, you don’t have to think about it. You light another cigarette in your hammock and smile. Nothing more. 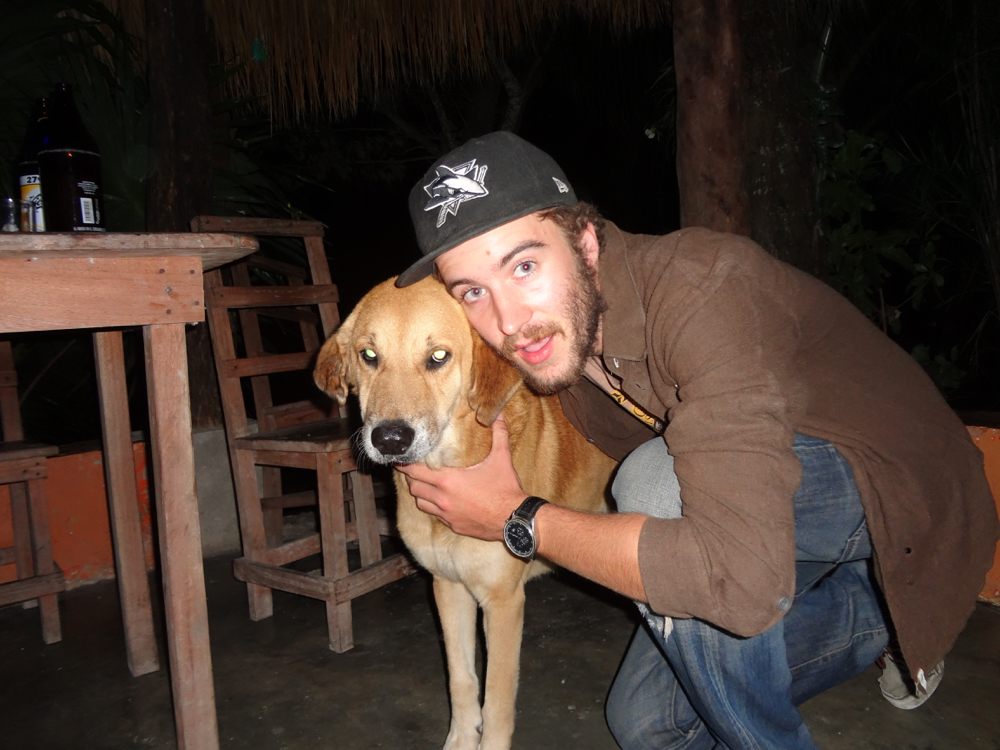 Meet Osso. He’s the one in charge at the Botadero. He makes us work hard. Strict but fair.

Our motto here is poco a poco – little by little. We even have a song about it. What better way to close a blogpost with a song, and a perfect depiction of the vibe we’ve got going here.

One thought on “Hard at Work at the Botadero, Paraiso”